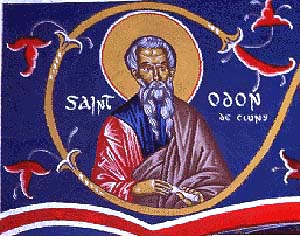 Devoted to St Martin of Tours, Odo died in that city.

Patrick Duffy outlines some details of his life and the context in which he lived.

Cluny
The Benedictine Abbey of Cluny was founded in AD 910 by William I, Count of Auvergne, who installed Berno of Baume as its first abbot and placed the abbey under the immediate authority of the Pope. In this way Cluny was immune from all secular interference. 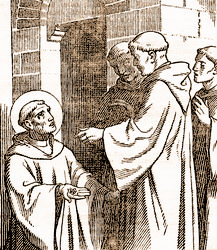 Odo its second abbot
Odo had been educated at the court of William. At nineteen he received the tonsure, and became a canon in the church of Saint Martin at Tours. Here he ceased reading Virgil and other profane authors, resolving only to read such books as nourished Christian devotion.

He studied theology for four years at Paris and on his return to Tours devoted himself entirely to prayer and the study of the Scriptures. Reading the Rule of St Benedict, he decided to become a monk under Berno at the abbey of Baume. Soon he became a priest and when Berno became the founder and first abbot of Cluny Abbey in 910, Odo followed him there, bringing his library. On Berno’s death in 927, Odo became the second abbot of Cluny. 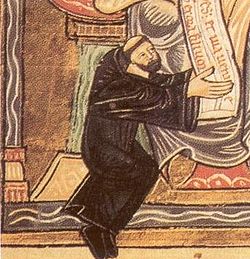 Odo Inspires reform
Most Benedictine monasteries up till then were independent, but those founded from Cluny remained priories subject to the mother house. In this way Cluny became the model of monasticism for over a century in both France and Italy. Odo insisted on the strict observance of silence as absolutely necessary for interior solitude and the communion of a soul with God. He also stressed humility, obedience, self-denial and especially chastity.

Influence in Italy
Odo visited Italy several times between 936 and 942, founding in Rome the monastery of Our Lady on the Aventine and influenced reform in other monasteries, such as Subiaco and Monte Cassino.

Death at Tours
Out of devotion to Saint Martin, Odo wanted to die at Tours, and hastened there in his last illness. He died on the 18th of November 942 and was buried there.