Summary: St Nicholas of Tolentino was born in 1245 0r 6,  gaining a reputation for working miracles and making peace. Tolentino had a name as a trouble town, but Nicholas brought it peace.  He was known as the Patron of Holy Souls, was an Italian saint and mystic. 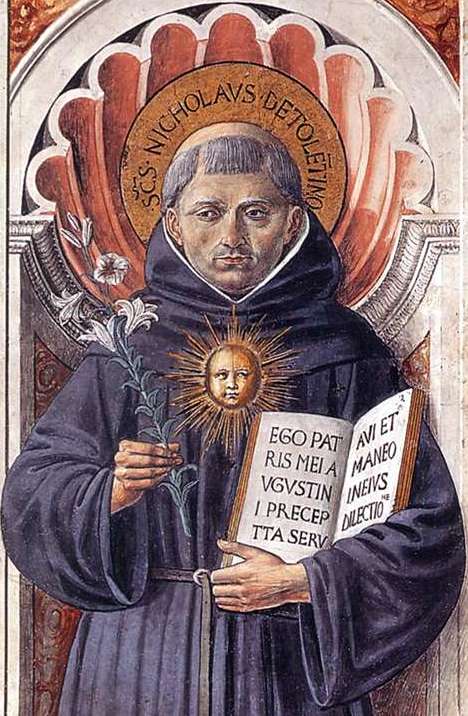 Born in answer to prayer, Nicholas of Tolentino became an Augustinian friar, gaining a reputation for working miracles and making peace. Tolentino had a name as a trouble town, but Nicholas brought it peace.

His name: a token of gratitude from his mother
Nicholas was born in the town of Fermo in the Marche region of eastern Italy on the Adriatic. His parents were childless for six years. They prayed at the shrine of St Nicholas of Bari and in thanksgiving christened their son Nicholas.

St Nicholas’ bread for the sick and poor
Nicholas joined the Augustinian friars at eighteen. He often fasted and performed other penances, spending long hours in prayer. Once, when severely ill, he had a vision of Mary, Augustine and Monica telling him to eat a certain type of bread roll that had been dipped in water and he recovered. He then began himself to bless and distribute this bread to the sick and poor, who were also healed. He became so enthusiastic about this that the prior accused him of squandering the community’s resources. He had a reputation as a healer, even before he was ordained in 1269. The rolls became known as Saint Nicholas’s Bread, and are still distributed in his memory.

Peace to Tolentino
After his ordination Nicholas was stationed at a friary where he felt comfortable, but one day he heard a voice telling him, “To Tolentino, To Tolentino”. Tolentino was a town that was troubled by rival pro-and anti- papal factions. Here he preached in the street and despite opposition and ridicule, he was able to restore peace to the town. He continued his lengthy fasts and received visions. He became known as a sympathetic confessor and for visiting the sick and poor. 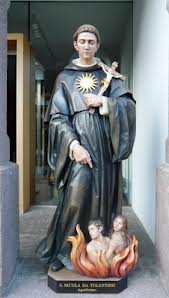 Souls in purgatory
Once, while asleep, a fellow friar who had died shortly before spoke to him from purgatory and urged him to celebrate the Eucharist for him and other souls there, so that they would be set free by the power of Christ. Nicholas did so for seven days. The friar again spoke to Nicholas, thanking him and assuring him that a large number of souls were now with God. Because of this Nicholas was proclaimed patron of the souls in Purgatory.

Death and influence
Nicholas died on 10th September 1305. Pope Eugene IV canonised him in 1446, and his relics were rediscovered at Tolentino in 1926.

(In the Augustinian Church of St John the Baptist and St Augustine (John’s Lane) in Thomas Street, Dublin, behind the high altar there is a stained glass window depicting St Nicholas of Tolentino in red vestments celebrating Mass for the souls in purgatory also depicted  – with one soul being escorted into heaven.)