St Knoll of Nathalan.  A Scot by birth, by legend a rich man, Knoll became a monk and earned his living by cultivating the soil, which he also found good for contemplation. 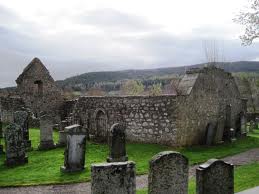 As a Scot by birth, from the village of Tullicht, near Aberdeen, where he is said to have built a church. He picked an excellent site, which was called Tulachnathlak, the knoll of Nathalan. During the Reformation, however, the saint’s name was dropped, and it became known as just Tulach or Tullich. Nathalan is also said to have built churches at Bothelim and Colle (Cowie).

(The image(above right) shows the ruin of the church at Tullicht near Aberdeen, which was called Tulachnathlak, the knoll of Nathalan, after our saint of today.) 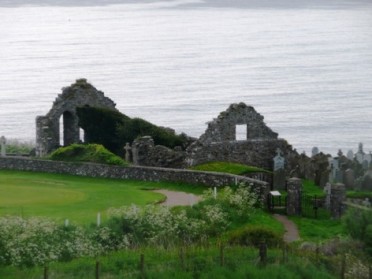 St Nathalan is reputed to have built the first small chapel at Cowie on this windswept clifftop sometime during the 7th century.

The 16th century Aberdeen Breviary portrays Nathalan as a rich nobleman who decided to cultivate the earth in order to devote himself to God as a hermit. He also fed the people nearby in times of famine. He is praised for having earned his living by cultivating the soil, “which approaches nearest to divine contemplation”. He found that farming also served him as a type of penance.

Legend of the lock
Nathalan’s story also has elements of folklore. When a sudden storm interfered with his harvest, Nathalan protested against God. But when he realised what he had done, he was struck with remorse and to punish himself, he locked his hand and leg together with an iron lock and threw the key in the River Dee. The key was swallowed by a fish

To Rome and promotion he becomes a bishop
He vowed that his arm would never be free until after he had made a penitential pilgrimage to Rome. When he arrived in the holy city, he met a boy who offered him a fish for sale. Nathalan bought the fish and recovered the key from its belly. When the Pope heard of this miracle, he decided to make Nathalan a bishop!