Summary: St Mochua of Timahoe: There are reputedly fifty-eight Mochuas among the saints of Ireland, the one celebrated today is associated with Timahoe in Co Laois, a village about ten kilometres south-east of Portlaoise. (In 2005 an interesting project to commemorate him was taken up by the local school children.)

Patrick Duffy tells what is known about the saint and the project which commemorates him.

Mochua was from Achonry in Connaught. His father was Lonan. He became a successful soldier, but at the age of thirty decided to become a monk. His principal foundation was at Timahoe (Teach Mochua = “Mochua’s house”), Co Laois. 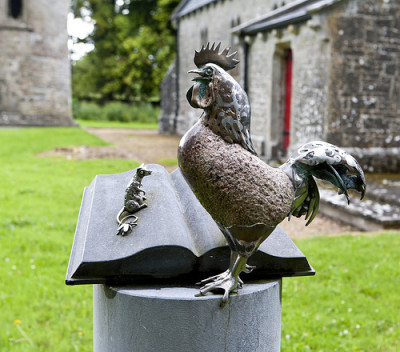 2.  If, weak from his vigils and prayers and dosed off during the day, the mouse would nibble at his ear to arouse him again.
3. The fly would walk along each line of his Psalter as he read it, and when he became tired, the fly would stop at the point where the saint had broken off until he could return to resume reading the Psalms.

St. Mochua’s Desk
In 2005 the children of the local Scoil Mhuire Fatima decided to enhance their village through the creation of a piece of sculpture. Through The Laois Leader, the Timahoe Development Association, local sponsorship and artists they succeeded in having a sculpture called St Mochua’s Desk erected to commemorate the story of their local saint – It took the form of St. Mochua’s Desk with rooster, mouse and fly. It is constructed out of welded stainless steel, red granite and bronze: the book and the column are made of limestone. Through the local library the children also researched the history of the building in the area – the Round Tower, the Monastic ruins and a former church turned into the Willie Headon Memorial Library. They had an environmental clean-up in the grounds around the round tower and got Dúchas to put up a sign detailing the history of Timahoe.

At the unveiling a small replica sculpture was presented to the school principal, David O’Brien. He was delighted. “Timahoe now has a wonderful piece of sculpture, which I’m sure will be written about in tourist brochures. When people come to see it they will want to learn more about Mochua and the history of Tigh Mochua”, he enthused. “All of this will make our children even more proud of their village”. 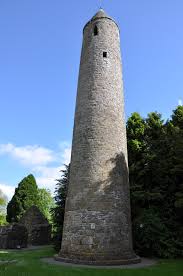 Death and influence
The year 657 is given as the year of his death. There is a record of the burning of an oratory of St Mochua there in 919 and the Annals of the Four Masters give details of abbots of Timahoe. A monastic community existed in Timahoe up to 1650. Today there is a round tower and the ruins of a church to the south-east of the village.

Other Mochuas
Some monasteries in Scotland claim Mochua as their founder, but it is important to note that there are fifty-eight Irish saints with the name of Mochua.The name is  also associated with places at Celbridge, Co Kildare and Clondalkin, Co Dublin and with Derinish in Co Cavan.