Summary: Melania the younger,  the daughter of Publicola, only son of St Melania the Elder, married at fourteen, and gave birth to two children who died young. Afterwards  she negotiated with her husband that they live as “brother and sister”.

St Melania the elder
Melania’s paternal grandmother became a widow at twenty-two, then took a vow of celibacy, gave away most of her possessions and devoted herself to charitable causes. She went to Jerusalem, where she was associated with St Jerome and built a monastery there. She had a rather domineering personality and her relations with her granddaughter were somewhat strained. She died in 410 and is known as St Melania the Elder.

From married couple to “brother and sister” relationship 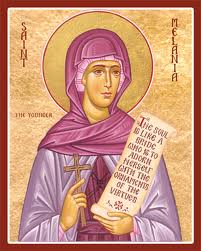 Melania the Younger was born at Rome, about 383 into the family of the Valerii. Her parents were Publicola and Albina. When she was fourteen, her father, anxious to see the family continue, arranged a marriage with a family relative, Valerius Pinianus, who was three years older than Melania. During her married life of seven years she had two children who died young. After their death Melania’s inclination toward a celibate life reasserted itself. At first her husband refused and her father Publicola stopped her associating with Christians. Even after the birth of her daughter, he insisted on having a male heir. She became pregnant again and gave birth to a boy, who died the day after his birth. Then the daughter died and Melania became seriously ill. Pinian then took an oath that if she lived they would be celibate. Five years later her father died, begging her forgiveness and leaving her all his considerable property with estates in Italy, Sicily, Spain and Africa. Her mother Albina was won over to Melania’s opinion. After this Pinian and Melania lived together as “brother and sister”. 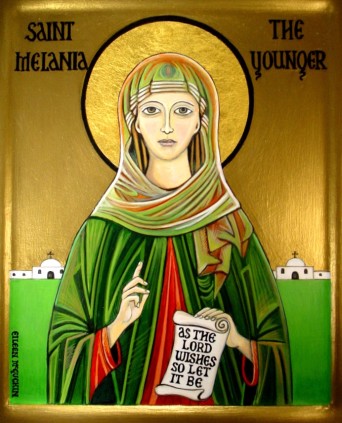 In Sicily (408-410) and North Africa (410-417)
Then at the time of the Visigoth invasion, all three left Rome and moved to a family estate near Messina in Sicily, where they lived for two years. Later they moved to another family estate at Tagaste, Numidia, in North Africa. Here they met St Augustine, who called them “real lights of the Church”. The people of Hippo wanted Pinian as their priest, but Augustine said he should continue to live as a layman. Melania founded a monastery for men, of which Pinian took charge, and another for women. She freed many slaves living on the African estates and many of these entered the monastery. Melania lived with the women, fasting and wearing sackcloth. She spent many hours transcribing manuscripts, a work at which she was really skilled.

Jerusalem (417-439)
In 417, all three went to Palestine by way of Alexandria, where they visited the principal places of monastic life and hermitages. In Jerusalem, they lived in a hospice for pilgrims in Jerusalem, and met St. Jerome, whose disciple and collaborator Paula was Melania’s cousin. She became a member of Jerome’s circle of helpers. She lived in Jerusalem for twelve years in a hermitage near the Mount of Olives. Her mother died in 431 and after this Melania opened a convent for women on the Mount of Olives, which she inspired and maintained, but refused to become its superior. After her husband’s death she built a cloister for men, then a chapel, and later, a larger church. She attracted many men and women to a solitary way of life, one of whom was her chaplain and biographer, Gerontius.

Visit to Constantinople (437)
Melania’s uncle Volusianus, a diplomat at the court of the emperor Valentinian, wrote inviting her to Constantinople. She did go there and helped in his conversion to Christianity and assisted him as he died on January 6, 437. She also mounted a campaign against Nestorianism.

Melania spent the Christmas of 439 in Bethlehem and died a week later.