Summary: St Maximilian Kolbe: Priest, Martyr. Born near Lódz (Poland) in 1894; died at Auschwitz.Oswiecim on this day in 1941. He was a Conventual Franciscan priest, used a printing press in Poland and in Japan to promote devotion to the Virgin Mary. He was interned in Auschwitz in 1941, endured hard labour,offered his life in place of a fellow prisoner who had a family to support, condemned to death by starvation and finally killed by lethal injection. He was noted for his energy, poverty, his compassionate ministry, and self-sacrifice. 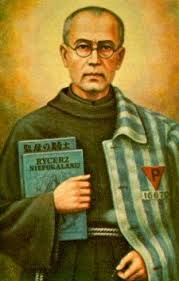 St Maximilian Kolbe was a Franciscan friar who volunteered himself to take the place of a man who pleaded to be spared in a death cell in Auschwitz. He was also a missionary, an evangeliser and publicist of note.

Founded the Knights of the Immaculate
Raymond Kolbe was born of religious parents at Zdanska Wola near Lodz in Poland. As a teenager, he became a Conventual Franciscan taking the name Maximilian Mary. He was sent to Rome to study philosophy and theology and was ordained a priest there in 1919. He had a great devotion to Our Lady. Seeing the opposition to Popes Pius X and Benedict XIV he began a religious movement called the Militia Immaculata, or Knights of the Immaculate, and when he returned to Poland he built a religious complex on land given him by Polish Prince Jan Drucko-Lubecki just west of  Warsaw, which he called the “City of the Immaculate”, Niepokalonów. He also published a newspaper and started a radio station.

A missionary in Japan and India 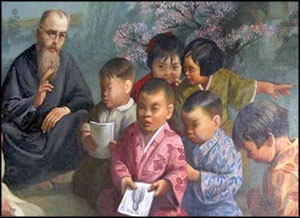 With little money and no knowledge of Japanese, St. Maximilian and four brothers travelled to Nagasaki, Japan, where they began their missionary work teaching children.

In 1930 Maximilian went as a missionary to Japan.Here he founded a monastery at the outskirts of Nagasaki, an evangelising newspaper in Japanese and a seminary.

The monastery he founded remains prominent in the Roman Catholic Church in Japan. Kolbe decided to build it on a mountain side that, according to Shinto beliefs, was not the side best suited to be in tune with nature. When the atomic bomb was dropped on Nagasaki, Kolbe’s monastery was saved because the blast of the bomb hit the other side of the mountain, which took the main force of the blast. Had Kolbe built the monastery on the preferred side of the mountain as he was advised, his work and all of his fellow monks would have been destroyed. A similar venture started in India did not continue through lack of personnel.

Return to Poland
Due to ill health Kolbe returned to Poland in 1936 to become superior of the religious complex at Niepokalonów with some 762 priests and brother friars. When the war started in 1939 he provided shelter for refugees, including 2,000 Jews whom he hid from Nazi persecution. On February 17, 1941 he was arrested by the German Gestapo and later transferred to Auschwitz. 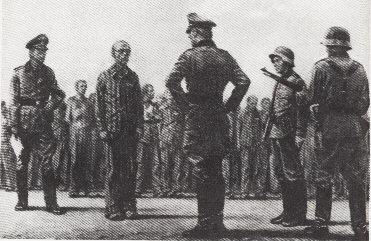 In July 1941 a man from Kolbe’s barracks vanished, prompting the deputy camp commander to pick 10 men from the same barracks to be starved to death in a cell in Block 13 (notorious for torture), in order to deter further escape attempts. (The man who had disappeared was later found drowned in the camp latrine.) One of the selected men, Franciszek Gajowniczek, cried out, saying he had a family, Kolbe moved by his pleas,volunteered to take his place. He was allowed to do so. 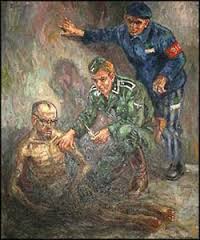 “A saint without relics!”
During the time in the starvation cell he led the men in songs and prayer. After three weeks of dehydration and starvation, only Kolbe and three others were still alive. Finally he was murdered with an injection of carbolic acid. When this story and the cremation of his body was reported to the Auschwitz commandant, a former Catholic, he laughed, saying, “A saint without relics!”

Canonisation
The man Kolbe had stood in for, Franciszek Gajowniczek, survived the concentration camp, but found that his teenage sons had died in the Warsaw uprising at the end of the war and his wife never recovered from the death of her children. He went to the Knights of the Immaculate to tell them what Father Kolbe had done for him. His testimony started the process of canonisation. He was present at Maximilian’s beatification by Pope Paul VI in 1971 and at his canonisation by Pope John Paul II in 1982. 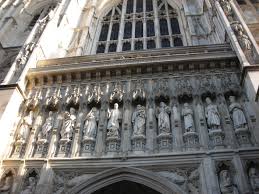 At his canonisation Maximilian Kolbe was proclaimed a martyr, which strictly speaking is not correct, since he was not put to death in odium fidei (“out of hatred of the faith”).  He is one of ten 20th-century martyrs from across the world whose statues stand above the Great West Door of Westminster Abbey, London. After his canonization in 1982 St. Maximilian Kolbe’s feast day was included on 14th August in the General Roman Calendar used of the Roman rite of the Catholic Liturgy (ordinary form).

P.S.
(Here is a commemorative song by Father Kevin McGee, called Maximilian Kolbe. It is well worth checking on, copying and googling: