Summary: St Maughold It was on the Isle of Man that this saint is said to have landed on from Ireland. He has a number of variations to his name: one is Machalus and another is MacCaille. Is he the patron saint of the Isle of Man?

Patrick Duffy writes about some of the traditions associated with him. 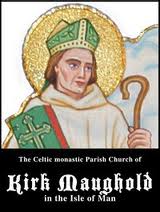 Towards the north-east corner of the Isle of Man near Ramsey is the parish of Kirk Maughold. It has a headland called Maughold Head (373 feet), which derives its name from St. Maughold, or Machalus. Tradition says the saint landed at the foot of this headland towards the close of the 5th century and established himself in a cave in the mountain side.

An Irish prince and pirate
The legend about Maughold or Machalus is that he was an Irish prince who was a pirate. It is said that St Patrick baptised him and then urged him to change his life: as a penance for his previous crimes, Patrick ordered him to abandon himself to God in a wicker boat without oars. Maughold is said to have come ashore on the Isle of Man at the headland known today by his name. He entered into a cave in the mountains there and lived a life of austerity and piety. He was eventually chosen by the local people as their bishop. 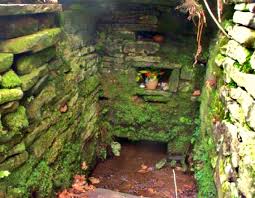 St Maughold’s Well
There is still a church and graveyard dedicated to the saint at the place near where he landed. On the brow of the hill not far away there is a holy well. A ledge of rock nearby is called St Maughold’s “chair”. A favourite devotion of pilgrims has been to sit on the ledge, invoke the saint’s help, drink the water of the well, which is said to prevent poison.

“a rod of gold,
a vast ingot,
the great bishop MacCaille.”

Another Machalus? St MacCaille of Croghan, Co Offaly
There is another saint of this name: St MacCaille, a bishop, associated with Croghan, Co Offaly. St Brigid is said to have approached him with seven companions wanting to dedicate themselves as virgins to God. He received their vows. Later they moved to Ardagh and St Brigid came to St Mel for profession. St MacCaille was present during the ceremony. A mysterious manifestation of the Holy Spirit caused St Mel inadvertently to read over her the prayer episcopal consecration. When St MacCaille protested, Mel said he was convinced that this had happened according to the will of God and insisted that the consecration should stand.

And another!
There was a chapel near Chapeltown in Banffshire, Scotland, known as Kilmaichlie, which seems to refer to the Isle of Man saint, who may have had some connection with Scotland – either through himself or his disciples.