Summary :St Matthias, Apostle. A companion of Jesus and a witness to the resurrection. Chosen by lot to take the place of Judas and so to share the apostolic ministry of the twelve (Acts 1:15-26). He is named in Eucharistic Prayer I (The Roman Canon) 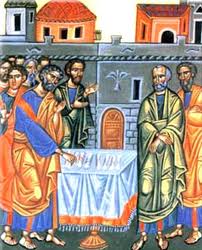 After the death, resurrection and ascension of Jesus and in the wake of the suicide of Judas, Matthias was chosen by lot as an apostle to replace him (Acts 1:15-26). Matthias is venerated in the Benedictine Abbey of St Matthias in Trier, Germany.

Criteria for replacing Judas
The criteria set by Peter for the replacement among the apostles after the suicide of Judas were that he should be “someone who has been with us the whole time that the Lord Jesus was travelling around with us from the time when John was baptising until the day when he was taken up for us and he can act with us as a witness to his resurrection” (Acts 1:21-22). 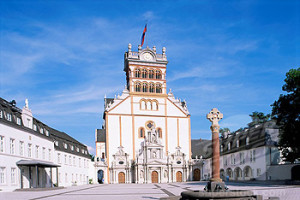 Traditions about Matthias
Tradition says he worked first in Judea and later in Cappadocia and at Colchis in present-day Georgia, where he is said to have died, but another tradition locates him in Ethiopia. Still another tradition says he died in Judea. His supposed relics were brought to Rome by the empress Helen, the mother of Constantine; they are now venerated in the Benedictine Abbey Church of St Matthias in Trier, Germany.

A lost Gospel, but apocryphal
There has also been some confusion between Matthias and Matthew, though it is true that there was a now lost Gospel of Matthias mentioned by Origen, Eusebius, Jerome and in the Decree of Gelasius, which declared it to apocryphal and therefore not included in the Canon of Scripture.