Summary: There is an irony that Matthew, a Jew was a tax collector for the Romans and accused of being a traitor to his own people, should in his Gospel portray Jesus as the Messiah, the fulfilment of all God’s promises to the Jews. 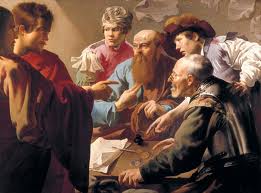 Matthew “the tax collector“
is identified with Levi, son of Alphaeus, in Mark 2:13. In the list of the apostles (Matt 10:3) he  is called “the tax collector”. Jesus saw him sitting by the customs house in Capernaum and said to him: “Follow me”. And leaving everything, he got up and followed him (Mt 9:9). Mark (2:14) and Luke (5:27-32) call him Levi when they describe this event.

As a Roman tax collector, the people would have  regarded Matthew as an exploiter and collaborator with the Romans, in that sense a traitor to his people. And so when Jesus and other disciples were at dinner at Matthew’s house, the scribes and Pharisees taunt the disciples, “Why does your master eat with tax collectors and sinners?”

Jesus uses that occasion to declare the core message of his mission and of the gospel: “It is not the healthy who need the doctor, but the sick. Go and learn the meaning of the words: What I want is mercy, not sacrifice. And indeed I did not come to call the virtuous, but sinners.” 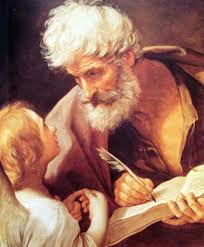 Matthew and inspiration for his Gospel

Matthew’s gospel
St. Matthew’s gospel has pride of place in the canon of the New Testament. Its purpose was to convince Jews that the Messiah had come in the person of Jesus, our Lord, and that all the promises of the messianic kingdom, the promises God made to his people, the Jews, had been fulfilled in him. There is an irony in this for one who was accused of being a traitor to his people. His name means “gift of the Lord”. Up to this time Matthew had never known such mercy. He was a bruised person. When Jesus called him this bruising was healed and he was freed of that pain.

Later life
Little definite is known about Matthew’s later life. Legend has it that he preached the gospel for a long time after the ascension and carried it to Persia and Ethiopia where he was killed.

Patronage
Matthew is the patron of bankers, accountants, book-keepers. tax people, customs officers and all those who work in financial, customs and security institutions.