Summary: St Mary of Egypt is presented in the Eastern Church as a model of true repentance. Mary had been an actress and a prostitute in Egypt before being miraculously converted, becoming a penitent and living as a hermit in Palestine.

A story for edification to illustrate the pattern of repentance 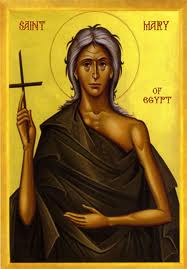 This story was written by Bishop Sophronius of Jerusalem and translated into Latin by Paul, deacon of the Church of Naples. It was a story which the monks had preserved orally and like that of St Pelagia (8th October) told it to pilgrims as a pattern for education and repentance.

From Alexandria to Jerusalem
Mary was an Egyptian who left home at the age of twelve and went to live in Alexandria where she became an actress and a prostitute for seventeen years. At the age of twenty-nine she joined a pilgrimage to Jerusalem through curiosity, paying for her passage by offering herself to the sailors.

Living in the desert 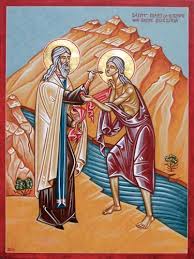 Once in Jerusalem, although wanting to enter the Church of the Holy Sepulchre, she was held back by an invisible and irresistible force. Lifting her eyes to an icon of the Blessed Virgin, she was told to go over the Jordan where she would find repentance and rest. She bought three loaves and went to live in the desert, where for the rest of her long life she lived on the bread which never diminished and on dates and berries. Her clothes wore out but her hair grew long and covered her nakedness. She could not read but was divinely instructed in the Christian faith and never tired of doing penance.

Meeting with Zosimus
A devout monk called Zosimus met her by chance in the desert and heard her story. At her request he covered her with his cloak. He promised to meet her in the same place the following Holy Thursday to bring her Holy Communion. But when he came, what he found was her dead body. A lion who was nearby dug out with his paws a hole big enough so Zosimus was able to bury the body. The lion then went into the depths of the desert as meekly as if it were a lamb. Zosimus went home blessing and praising God and singing hymns to Our Lord Jesus Christ.