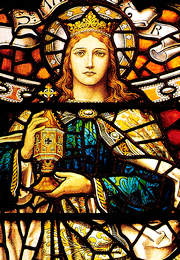 Summary: Margaret of Scotland was the grand-daughter of the Anglo-Saxon king of England, Edward the Confessor (1042-66), and when she married Malcolm III of Scotland, she brought a Christian as well as an Anglo-Saxon influence to the court at Dunfermline.

Born in Hungary
Margaret was born in Hungary. She was the daughter of the Anglo-Saxon Edward the Atheling (heir to the throne) and Agatha kingswoman of Gisela, wife of St Stephen of Hungary, where her father Edward the Atheling had taken refuge during the reign of King Canute in England. She received a good education there, developing an appreciation of beautiful books and clothes.

Back in England
In 1057 Edward the Confessor, king of England from 1042 to 1066 and saint (feastday:13 October) summoned her father back to England planning to make him heir to the throne of England, but Edward, the Atheling died just after arriving back there. Soon afterwards the arrival of William the Conqueror and the Norman conquest led to Margaret and her brother heading for the continent again. Their ship was blown off course and they landed on the coast of Fife in Scotland, where they were welcomed by King Malcolm III Canmore.

Marries Malcolm of Scotland 1070
Malcolm was probably a widower, and was no doubt attracted by the prospect of marrying one of the few remaining members of the Anglo-Saxon royal family. Although Margaret at first resisted, the marriage took place about 1070 in the palace of Dunfermline (capital of Scotland till 1603). She bore him six sons and two daughters.

Marriage of St Margaret Margaret married Malcolm III ‘Canmore’ of Scotland in c.1070. Margaret would have been about 24 years of age and Malcolm about 47. t was a happy marriage.

A civilising influence
Margaret proved a civilising influence at the somewhat rough Scottish court and promoted Roman practices such as the observance of Lent and Easter and abstinence from servile work on Sundays. She was also influential in introducing English-style feudalism and parliament to Scotland.

Diligent in caring for her husband, her children, and the poor, she also found time for reading and was an accomplished needlewoman. Malcolm never learned to read, but he appreciated books as beautiful objects. Margaret was terminally ill when her husband was killed at the Battle of Alnwick in Northumbia, and she herself died aged forty-seven shortly afterwards on 16th November 1093. She was buried beside him in Dunfermline Abbey.

Cult of Queen Margaret
A popular cult soon developed. Pope Innocent IV canonised her in 1250. Later in 1560 when Dunfermline was sacked by the English, Margaret’s body and Malcolm’s passed into the possession of Mary Queen of Scots and were later taken to Philip II’s palace of the Escorial, near Madrid. Her head was separated, as was often done to allow more widespread veneration, and was taken first to Edinburgh and then to the English College at Douai. She was made patroness of Scotland in 1673.

Heritage
Malcolm had eight children, all with English names. Alexander and David followed their father to the throne, while their daughter, Edith (who changed her name to Matilda upon her marriage), brought the ancient Anglo-Saxon and Scottish Royal bloodline into the veins of the Norman Invaders of England when she married and bore children to King Henry I.

It is said that during Margaret’s time Mass was changed from the many dialects of Gaelic spoken throughout Scotland to the unifying Latin. By adopting Latin to celebrate the Mass Margaret believed that all Scots could worship together in unity, along with the other Christians of Western Europe. Many people believe that in doing this, it was not only Queen Margaret’s goal to unite the Scots, but also Scotland and England in an attempt to end the bloody warfare between the two countries. The Celtic factions did altogether not appreciate these Anglicising influences and she is sometimes referred to in the Celtic traditions as Maighread nam Mallachd, “Margaret of the Curses”.