Margaret of Cortona is said to have suffered from bi-polar symptoms, that is, sometimes manic and at other times abnormally depressed states in a way that interferes with functioning. Others have described her as a second Mary Magdalene.

Mother dies when she is seven 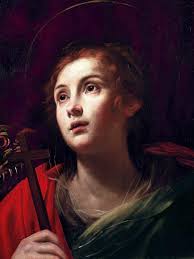 Margaret was born into a peasant family in a village of Umbria. Her mother died when she was seven, and two years later her father remarried. As her stepmother turned out to be harsh and unsympathetic, Margaret tended to go her own way. She missed her mother, but always remembered a prayer she taught her: “O Lord Jesus, I beseech thee, grant salvation to all those for whom thou wouldst have me pray.”

Lover to a young nobleman for nine years
When she was seventeen, she heard that a wealthy young nobleman from Montepulciano needed a servant in his castle. Margaret went there, knowing, that she would be free from her stepmother and, within limits, could live as she pleased. The nobleman began to take notice of of the handsome girl who had an air of independence and he paid her his attention. He gave her luxurious garments and gold chains for her hair and soon they became lovers, but although Margaret lived as his mistress for nine years and they had a son, he did not marry her.

Her Lover’s death
Once while her lover was absent for a few days visiting his estates, his dog returned without his master. Margaret, sensing something amiss, followed the dog to discover his murdered body in a forest. At the sight, she began to blame herself for his irregular life, and to loathe her beauty which had fascinated him. She gave all the jewels, clothes and property he had given her back to his family or to the poor. She then made a total commitment to Jesus, who had already begun to give her glimpses of himself in mystical prayer. 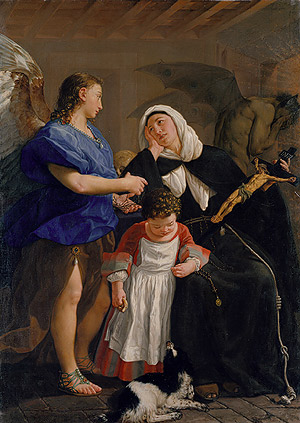 Her conversion
Taking her son with her, Margaret returned to her own family, wanting to live as a penitent. But her father and stepmother refused to take her in. She then went to nearby Cortona asking help from the Franciscans, but a Franciscan brother told her, “You are too young and too pretty”. Two ladies, Marinana and Raneria, took her and her son into their home and later introduced her to Brother Giunta Bevignati, who became her confessor and wrote an account of her life and visions. She made a general confession which took a week to complete. At the end, she had the joy of hearing Jesus call her his daughter. 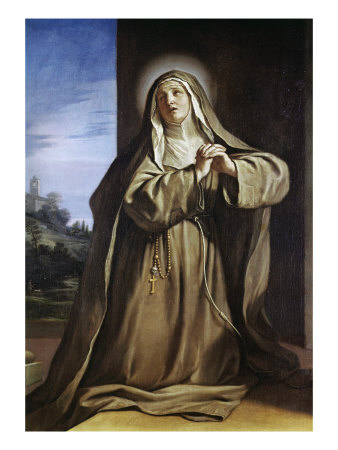 Mortifications
Margaret led a life of public penance, undertaking severe mortifications. She once wanted  to disfigure her face with a razor, so as to destroy her beauty, but her confessor forbade it. She devoted herself to prayer and earned her living by looking after sick ladies. Later she gave her service, without pay, to the sick poor. When the Franciscans were convinced of her sincerity, they admitted her to the third order of St. Francis. Her son was sent to school at Arezzo, and later joined the Franciscan Order.

A hospital to look after prisoners
With other Franciscan Tertiaries she founded a hospital to look after prisoners. She lived in a cell near the convent of St Francis and counselled penitents who began to seek her as her fame for sanctity spread. Although her fear of herself was never far away, she gradually grew in confidence because she knew that now she was loved by Jesus who would not fail her. Accusations were made against her, even suggestions that she had an affair with Friar Giunta.

Isolation and death
In 1288, however, the Franciscan authorities, alarmed by her excess of devotion and her familiarity with the brothers, asked her to leave. She withdrew to a more isolated cell near the citadel of Cortona where she devoted herself entirely to contemplation, and remaining there alone, except for the visits of her priest, until she died at the age of fifty in 1297. She was buried in the Church of St Basil in Cortona, where her incorrupt body still remains. 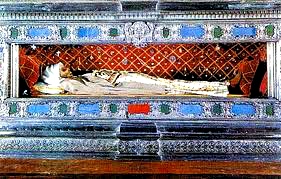 After 23 years of rigorous penance, in the 50th year of her life, God called the great penitent to the Beatific Vision.

Veneration
Although she was immediately venerated as a saint, she was not officially canonised until 1728. The French novelist François Mauriac has written a moving account of her life, drawing attention to how tragically beautiful, if astounding and repulsive, the life of a penitent is.