Summary of  St Macartan: A Tréanfhear of Patrick who who became bishop of the Diocese of Clogher. 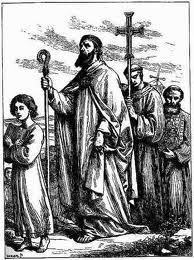 St Macartan (Aedh MacCairthinn) was a convert from paganism. He is said to have gone south from his home in the north to hear Patrick preach and that their first meeting took place at Drumlease, near Dromahair, County Leitrim. Soon Patrick baptised him and Macartan became Patrick’s companion and bodyguard. Because of this, he became known as the “strong man” (tréanfhear) of Patrick. When Patrick became worn out by his labours, Macartan would carry him on his broad shoulders across rivers and over rough ground.

Bishop of Clogher
An ancient life of St Macartan tells the story that as Patrick was crossing a stream at the druidic stronghold of Clogher, Macartan, his strong man, groaned exclaiming: “Ugh! Ugh!” “Upon my good word,” said Patrick, “it has become usual with you now to be making that noise.” “I am now old and infirm,” said Macartan, “and all my early companions in mission-work you have settled down in their respective churches, while I am still travelling.” “Found a church then,” said Patrick, “that shall not be too near us (at Armagh) for familiarity, nor too far from us for communication.” And that is how Patrick made Macartan bishop of Clogher.

The diocese
Macartan preached the gospel in Tyrone and Fermanagh. He died in the year 506 from natural causes and is thought to have been buried at Clogher, in Co Tyrone. There are two cathedrals of the Church of Ireland in the Clogher diocese – one in Clogher village and one in Enniskillen. In post-Emancipation times, a great Catholic cathedral designed by architect J. J. McCarthy was built high on a hill above Monaghan town between 1864 and 1892. The diocese of Clogher of which St Marartan is the patron, includes County Monaghan, most of County Fermanagh and portions of Counties Tyrone, Donegal, Louth and Cavan. 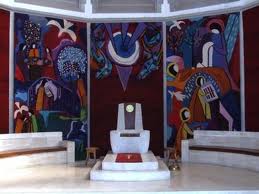 The Golden Stone (Cloch-Ór)
The Cloch-Ór (Golden Stone), from which this ancient diocese takes its name, may have been a ceremonial or oracle stone originally covered in gold sacred to the druids, and called the Cermand Cestach. It is said to have been given to Macartan by an old pagan noble, who had harassed him in every possible way until the saint’s patient love won the local ruler to the faith. The stone is preserved till today inside the Church of Ireland Cathedral in Clogher village, Co Tyrone. 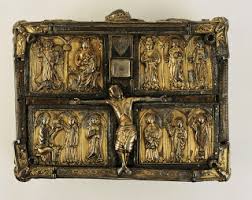 The Domhnach Airgid
Patrick is also reputed to have left a reliquary called the Great Shrine of St Macartan containing a fragment of the True Cross, known as the Domhnach Airgid.  This is now preserved in the National Museum of Ireland in Dublin.

Fortis et Fidelis
The spirituality of Macartan is evoked in the crest and motto of the diocesan secondary school for boys on the outskirts of Monaghan town. The crest is a cross and Celtic shield and, underneath, the motto of the college, Fortis et fidelis, recalls St Paul’s advice in 1 Cor 16:13: “Be firm in the faith, brave and strong“. The words occur in one of the last letters of Father Cornelius Tierney, a former student and priest-teacher in St. Macartan’s, and later a Columban missionary who died a prisoner of Communist guerillas in China in 1931.