Summary : St Lucy, Virgin, Martyr. Lucy died at Syracuse in Sicily, probably in the persecution of the emperor Diocletian in 304. Widely venerated from the earliest times, her memorial has long been kept on this day. Probably because her name is suggestive of light, her intercession has been sought for eyesight problems. Named in Eucharistic Prayer I (The Roman Canon) and remembered as a youth, radiant with Christian faith and courage.

Overview
Fr John Murray PP says:
“Our modern age may look at the short life of Lucy and the path she chose as somewhat bizarre. The idea of sacrifice she embraced – and especially the sacrifice of chastity – seems alien.” Some years ago I was teaching church history as part of a course for A-level studies. The period we covered was the early Church and part of that interesting era was the story of the persecutions. The ‘three S’s’ was one way of helping the students remember that particular series of events: ‘Short, sharp and sporadic,’ I would tell them.

Throughout those first three hundred years of the history of the Church, persecution was in isolated pockets throughout the Mediterranean area (sporadic); it could often be bloody with much loss of life (severe); but most persecutions never seemed to last too long (short). That was until the ‘Great Persecution’ during the reign of the Emperor Diocletian. And this happened during the years 303-312.

It was during this persecution that the St Lucy we remember this month gave her life for the Lord. How many countless little girls in Christian history have borne the beautiful name of Lucy! The story of the saint is a story of historical facts mixed with lots of legends. 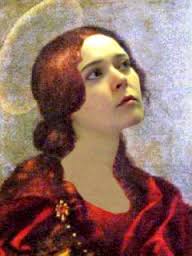 What we know about her is that she was of Greek lineage living in the large island of Sicily in the fourth century. Christians were still very much in the minority at that time and so when marriage was mentioned – and the girl was still in her early teens – it was thought natural that she would marry one of the local pagan noblemen. Lucy even then had other thoughts but kept them to herself. However when her mother Eutychia was healed through the intercession of St Agatha, a martyr of the previous Decian persecution (249-251) she expressed gratitude to God for this healing by allowing her daughter to devote herself to the service of the poor.

Lucy had by this time made known her intentions to her mother, and these did not include marriage. Already within the early Church there was growing up a desire among young men and women to give their lives to Christ in virginity.

Stories of martyrs
The third century had been relatively quiet in terms of persecution and so, when martyrdom was not an option – Christians grew up with the stories of the great martyrs and heroes and heroines of an earlier Church – the desire to consecrate one’s life in chastity became a real desire for many. Such was the choice of Lucy. One of her more prominent suitors was very unhappy about this and when he was unable to marry her, he denounced her to Paschasius, the governor of Sicily, as a Christian. 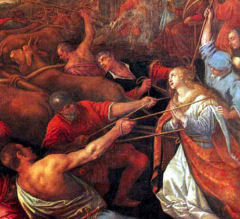 Lucy was defiant: ‘No one’s body is polluted so as to endanger the soul if it has not pleased the mind. If now, against my will, you cause me to be polluted, a twofold purity will be gloriously imputed to me. You cannot bend my will to your purpose.’

When the soldiers came to remove her they found she was so full of the Holy Spirit that they could not move her, even when they tied her to a team of oxen. Then they proceeded to stab her in the throat and finally when that failed, they gouged out her eyes.

Lucy’s eyes
In paintings and statues, Lucy is often seen holding her eyes on a golden plate. In one translation of Dante’s Purgatorio, it is noted that Lucy was admired by 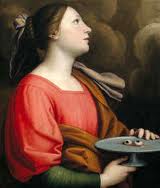 an undesirable suitor for her beautiful eyes. In order to stay chaste she chose to pluck out her eyes, and in another legend, sent them to the gentleman in question. Legend also has it that God rewarded her sacrifice by restoring her eyes. One cannot but think here of the words of Jesus: ‘If your eye should cause you to sin pluck it out; it is better to enter into heaven with one eye than to go to Hell with two’ (Mt. 5:29).

Our modern age may look at the short life of Lucy and the path she chose as somewhat bizarre. The age in which we live so encourages us in the words of a pop anthem made famous by Queen: ‘I want it all and I want it now.’ The idea of sacrifice – and especially the sacrifice of chastity – seems alien. And yet one dares to hope that the Holy Spirit continues to inspire young men and women to make sacrifices for the sake of others – and above all, for the sake of Christ. To fall in love with Jesus, to be excited and enthralled by Him – it is still possible.

Lucy’ story
The story of Lucy and her witness in martyrdom touched a new generation of Christians in the fourth century – just as the story of Agatha had inspired Lucy – and soon veneration to her sprang up in the Church. Her name is one of seven female saints who came to be venerated in the first Eucharistic prayer which became known as the ‘Roman Canon‘. Her feastday is on 13 December in the Roman calendar.

St. Lucy, intercede for all those suffering from blindness or loss of sight. Ask the Holy Spirit to fill our minds and our imaginations with a zeal for heaven, that we may not compromise ourselves for the sake of security here on earth and that we may lose our lives in order to find them. We ask this through Christ our Lord. Amen. 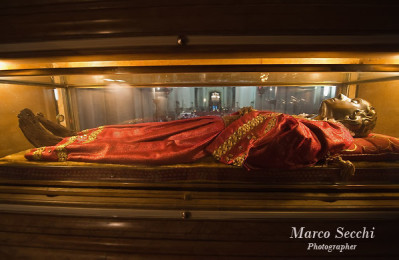 The incorrupt relics of St. Lucy, in the church of San Geremia, Venice (source)