Summary :St Laurence O’Toole, Monk was born in Leinster in 1123. studied at Glendalough, became abbot there in 1148, and in 1162 was chosen as the first native archbishop of Dublin. He followed the reforming methods of Ceallach and Malachy, introducing the Canons Regular to Dublin and following their Rule. He returned from Lateran HI as Papal Legate and held synods to extend reform. He died at Eu in Brittany in 1180 while on a mission to try to restore peace between the kings of Ireland and England. 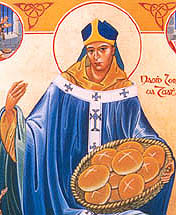 Archbishop of Dublin during the takeover of Ireland by the Normans and King Henry II, his efforts in the peace process and his frustration with King Henry probably caused his early death. Highly honoured at Eu in Normandy, France, where he died. It was the monks at Eu that introduced his cause to Rome.

Prince and hostage
Laurence O’Toole was born in Castledermot, Co. Kildare in 1128. His father was Maurice O’Toole, King of Hy Murray. It was common practice in those times for princes of one clan to be given as hostages to another clan, as a guarantee of peace. When Laurence was ten years old he was given as hostage to Dermot McMurrough, King of Leinster, who treated him very badly. Laurence was sent in chains to a remote place, where he got very little to eat; he hadn’t even enough clothes to keep him warm in the winter. For two years, even though he was a king’s son, he learnt what it was like to be poor and to be oppressed. 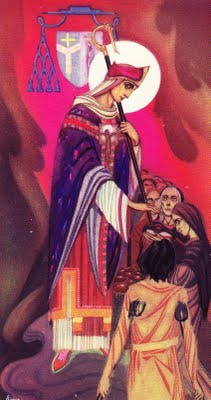 After two years, it was agreed that Laurence would be released. He was sent to a monastery at Glendalough, and the monks made him welcome. It was agreed that his father would come and collect him there. But Laurence soon came to love Glendalough. He liked joining the monks in prayer. He felt very close to God there. After his two years as a hostage, he realised that wealth and power were not important.

He asked his father’s permission to stay there, and become a monk, and his father agreed. When he was still only 25, Laurence was elected Abbot of the monastery. As the leader of the community he encouraged the monks in their learning. There was always a welcome in the monastery for the poor. When there was a famine in the area, Laurence sold some of the treasures of Glendalough to provide food for those who were hungry.

Archbishop
In 1162 Laurence became the first Irish-born Archbishop of the Danish city of Dublin. In those days, many of the people of Dublin didn’t take their Christian religion very seriously. Laurence encouraged them to become real Christians. He brought monks to Dublin from France, and they lived at Christchurch Cathedral. They helped many people to come back to Mass, and to the Sacraments. Laurence himself never forgot his own days of poverty. He continued to care for the poor, especially homeless children. He made room for them in his own house, and they shared the food at his table.

Man of prayer
Laurence was a man of prayer. He got up in the early hours to sing the office with the other monks in the cathedral and often stayed on afterwards, deep in prayer. Then he would walk for a while in the little graveyard, watching and praying over the city. When he had some free time, he loved to go to Glendalough and spend a few days in solitude in a lakeside hermitage which could be reached only by boat.

Mission to reform the Irish Church
As Archbishop of Dublin, Laurence participated in the Third Lateran Council in Rome in 1179, with some of the other Irish bishops. The Pope, Alexander III, knew that Ireland had been going through a bad time. He knew that many people, including priests, were no longer taking their religion seriously. He entrusted to Laurence the task of reforming the Church in Ireland.

The peace process
The Normans landed in Ireland in 1169. The following year they besieged Dublin under their leader, Strongbow. Laurence met Strongbow to arrange peace but the Normans attacked while the talks were going on. They seized the city, and began killing the citizens and looting their houses. Laurence saved the lives of many people.

He often visited England in his efforts to bring about peace between the two countries. Travelling by sea was dangerous and shipwrecks were common. More than once, his ship was caught in a violent storm. In 1175 he was one of the signatories of the Treaty of Windsor between England’s King Henry II and Ireland’s High King, Roderic O’Connor.

But the work of making peace is never finished. A new dispute broke out between the King of England and the Irish Kings. In the spring of 1180, Laurence left Ireland again to see if he could help to settle the dispute. The English King, Henry II, didn’t have much time for bishops. He had already arranged to have the Archbishop of Canterbury (Thomas à Becket) murdered. He would not welcome Laurence O’Toole. He saw a chance to get rid of Laurence as Archbishop of Dublin and would not let him come back to Ireland. Henry had control of Normandy as well as England. Laurence followed him there. As long as there was a chance of peace, he would not give up trying.

Death in exile
In 1180, Laurence became seriously ill. The monks at Eu in Normandy looked after him in their monastery. But eventually, on 14th November 1180, at the age of 52, he died.

His tomb is in the crypt, under the Collegial Church at Eu. Many people still go there to pray. Laurence was canonized in 1225.

His heart was transferred to Christ Church Cathedral in Dublin. The 800 year old heart relic was kept in a wooden heart-shaped container sealed within a small iron-barred cage in St Laud’s chapel in the cathedral. It was stolen in March 2012 but happily retrieved undamaged in 2018.

As the Jubilee Year of 2000 approached,  the idea began to take shape that Glendalough might once again become a source of spiritual energy for the Irish Church, as it was in the past. Fr Seán O’Toole, who was parish priest of Glendalough at the time, began to think in terms of developing a new hermitage around the “new” St. Kevin’s Church, which was built in Laragh shortly after Catholic Emancipation. He wanted to provide a place of welcome for pilgrims, where they could be accommodated comfortably in an atmosphere of quiet and prayer.

The hermitage project received support from various Church and community sources as well as from the Millennium fund, and five “Cillin’s” or “cells” were built in the vicinity of St. Kevin’s Church. Like the hermitages of old, they are slightly off the beaten track, a short distance away from the original monastic 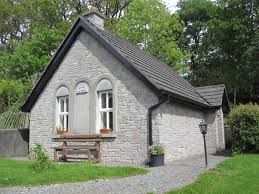 settlement. While pilgrims have easy access both to the monastic village and to the surrounding forests and mountains, they are also offered a degree of solitude in the hermitage which is not always available these days down in the valley.

The hermitages themselves, which are self-catering, are far more comfortable than the ones occupied by St. Kevin and the hermits of bygone days. Apart from the main room, which includes a bed, dining area and prayer space, each “cell” has a modern kitchenette and shower room. Pilgrims also have access to a library and prayer room in the Coachhouse. The parish Church is fifty metres away and mass is celebrated daily. A communal morning and evening prayer are celebrated in the coach-house. The hermitage project is staffed by two sisters of Mercy, Sr. Kathleen Delaney and Sr. Mary McKeever, both of whom are available to meet pilgrims if requested. Provision is also made in the coach-house for small groups who wish to meet in an atmosphere of quiet, “far from the madding crowd.”

Further information can be had by phoning 0404-45777 or by contacting www.hermitage.dublindiocese.ie