Summary of St Kilian:  an Irish monk, who like Columbanus, Fiacra, Fursey and Feargal went on an adventure to Europe spreading the good news from Mullagh, Co Cavan. He was put to death in 689.

Kilian is believed to have received his religious training at the monastery in Rosscarbery, Co. Cork founded by St. Fachtna in the fourth century. St. Kilian later founded his own monastery off Kilmakilloge harbour in the Kenmare area, where he trained his fellow monks and laid plans for one of the greatest pilgrimages ever undertaken from the shores of Ireland. From Kilmakilloge harbour, Kilian and his twelve companions , their heads tonsured in the traditional fashion of the Irish monks, set sail on their mission in a hide-covered boat. Their journey finally brought them to Rome where Pope Conan directed them to Germany and to the province of Franconia, where they set up their head quarters at Wurzburg in the year 686. All around, the countryside was pagan, with perhaps a few pockets of Christians here and there. The influence of the earlier Barbarian invasion was still felt.

Up the Rhine and the Main to Würzburg, Germany
Kilian is said to have sailed from neighbouring Kilmacillogue harbour with eleven companions on a mission to Germany. group landed at the mouth of the Rhine and travelled up the river until they reached the mouth of its tributary, the Main; then they sailed up this as far as the town of Würzburg.

To Rome
From there he went on to Rome arriving during the pontificate of Pope Conon (686-7) and stayed there for two years. Some accounts say Pope Conon confirmed him in his mission to Thuringia and Eastern Franconia.

Martyrdom
On his return to Würzburg, however, Kilian found that the Duke Gosbert had married his brother’s widow, Geilana. When Kilian explained that according to Canon Law the marriage was unlawful, the duke agreed to separate. But Geilana was not happy and plotted against Kilian. She had him murdered along with two companions Colman and Totnan, probably in 689. 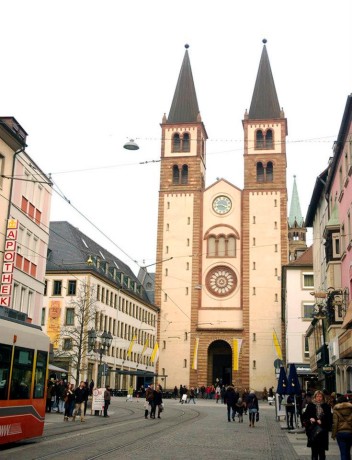 arrived in the area, they found evidence of Kilian’s influence. Burchard became the first bishop of Würzburg in 752 and transferred the relics of Kilian and his companions, which were being revered for many cures from illnesses, into the cathedral he built in Würzburg and dedicated to St Kilian.

St Kilian’s Cathedral, Würzburg
The present-day cathedral named after Kilian is one of the largest Romanesque churches in Germany. Kilian is the principal patron of Würzburg; his figure appears on seals and coins and a Kilianfest held every year is the occasion of an annual mystery play about his life.

In the Martyrology of Tallaght
News of Kilian’s martyrdom was brought back to Ireland and is recorded in the ninth-century Irish Martyrology of Tallaght: hymns and folk-songs were composed in his honour. There was  a house of Irish monks in the city of  Würzburg from the ninth century until the fifteenth and there are manuscripts of commentaries written in Old Irish on the Scriptures. In 1989 Cardinal Tomás Ó Fiaich visited the city to lecture about these writings and contacts.

P.S. Links between Würzburg and Ireland
Irish influence remains in Würzburg today as there is a GAA club called St Kilian’s with hurling and football teams that compete successfully at European level. St Kilian’s in the name of a German school (Deutsche Schule) in Dublin. It is situated on the Eurocampus in Clonskeagh, quite near to University College, Dublin. It provides a German language education from kindergarten, through primary and secondary levels.