Summary of St Kevin, abbot. Kevin grew up in Kilnamanagh in Leinster, where Bishop Lugaid ordained hum to the priesthood. He settled as a hermit in remote Glendalough but disciples gathered around him and eventually a monastic settlement grew up. Kevin died in 618 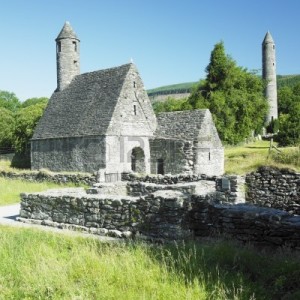 The image < shows some of the ruins of the monastic city of Glendalough which grew up there after St Kevin (Irish Caoimhghin). The themes of Kevin’s life include harmony with nature, a desire for solitude and asceticism, as well as the struggle around celibacy.

Dates of his life
The year of Kevin’s birth is generally given as 498 and the Annals of Ulster record the date of his death as 618. This would give him 120 years! More likely he was born in the middle of the sixth century.

Sources
The sources for his story are the Codex Kilkenniensis in Marsh’s Library in Dublin which has three Latin Lives written probably in the 11th century and three Irish Lives transcribed by Michael O’Clery in 1629 from the old books that relied on oral traditions and pilgrims’ tales. Pádraig Ó Riain (Dictionary, 149) notes that no critical edition and evaluation of the saint’s Lives has been attempted, so what we have about him are traditions.

Baptised by Cronan
His father was named Caomhlugh and his mother Caoimheall or Coemella. According to legend, when the boy was being brought to the priest Cronan for baptism, a person appeared and breathed on the child, blessing him and calling him Coemgen. Cronan believed this was an angel and said, “So shall he always be called Coemgenus (‘beautiful born’) for he will be most beautiful”.

Early formation at Kilnamanagh
His parents brought him to the monastery of Kilnamanagh in Tallaght near Dublin and here he underwent instruction and spiritual formation by three holy men, Eoghan, perhaps of Ardstraw, Lóchán and Éanna of Kilnamanagh.

A place of solitude
But at an early age he wandered off into the Wicklow Mountains and spent time in solitude at first at Hollywood near Blessington and finally in Glendalough. Legend says his place of solitude was revealed when the owner of a cow that strayed into the area discovered that she began to produce great quantities of milk. His three teachers came and took him back to the monastery where he continued his studies.

A story from his training time at Kilnamanagh marks him out as extraordinary. One day Kevin was supposed to bring a source of fire to light the candles for Mass, but forgot. ‘Run quickly for the fire and bring it,’ an older monk shouted. ‘How will I carry it?’ Kevin asked. ‘In your bosom,’ came the reply. Kevin went instantly and collected the fire in a cloth he had around him, but neither his clothes nor his flesh were harmed in any way. The older monk, full of remorse, said, ‘O holy youth, I see that you are full of the Holy Spirit.’

Another story about his choice of celibacy relates to his time of training at Kilnamanagh. A young woman saw him with his companions in the fields and fell passionately in love with him and pursued him in many ways but he resisted her advances. One day she came on him alone and embraced him and asked him tenderly to lie with her. Kevin rushed away and finding a bed of nettles, stripped off his clothes and rolled himself in them naked. When she further pursued him, he quickly dressed, took up a bunch of nettles and beat her off. She, realising the hopelessness of her quest, quickly repented and went off herself to become a nun. Probably the story shows that at the heart of Kevin’s quest for holiness there was a real struggle.

Ordained priest
Kevin was ordained priest by Bishop Lugidius and founded a monastery at Cluainduaich, though the location of this is unknown. 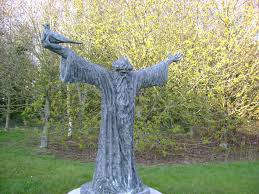 Kevin wore only wild animal skins and ate what food he could gather from the surrounding trees and plants. He slept on a stone slab with another stone as a pillow. Sometimes he would stand in the cold waters of the lake reciting the psalms – a common penitential practice for Irish monks – and keeping vigil. Many miracles of nature are told of him such as the one of his dropping his psalm book in the lake and it being brought back to him undamaged by an otter. Another is that during Lent, as he was praying with his arm outstretched, a blackbird settled in his palm, built herself a nest and laid an egg in it. Ever patient, kind and gentle to all living creatures, Kevin waited until the tiny bird had hatched and fledged before he moved, showing the harmony between him and nature.

Community and hermitage
A community of monks gathered round him, so he set up and ran a monastic settlement in the lower valley. After his death this became a monastic city. He also established a hermitage near his cave at the upper lake at Templenaskellig, dividing his time between his hermitage and the community. As an abbot who founded a monastic city, Kevin chose to remain as a priest rather than become a bishop. He spent most of his life at Glendalough, unlike some of his fellow saints who travelled widely on missionary journeys. Despite this remaining in one place, his influence and fame spread far and wide.

Death in harmony with nature
Before his death Kevin decided to remain permanently at his hermitage, asking his monks not to visit, bring food or disturb him in any way. The wild animals kept him company. A final story demonstrates the harmony with creation that seems to have surrounded him. A wild boar, which was being hunted, found its way into his oratory, closely pursued by dogs and men. The huntsmen, however, on seeing the saint kneeling under a tree praying, with birds perched on his shoulders and hands, were dumbfounded. The hounds lay down and would not go after the boar. For the sake of the hermit they all went quietly away and allowed the boar to go free. And so Kevin died.

His spirit lives on
Kevin’s spirit still lives on in Glendalough. Fr Michael Rodgers, who spent many years as a missionary in Africa, has made his own tearmann or retreat house in the valley and welcomes those who want to follow in the footsteps of the saint. See www.tearmann.ie . There is also a hermitage  there run by the Catholic Archdiocese of Dublin.