St Mungo Another famous Scot who bore the mungo name name several centuries later – Mungo Park (1771-1806) – was a famous explorer along the Niger River in West Africa. Kentigern means “head-chief”, but Mungo was a pet-name meaning “my dear one”.

Patrick Duffy tells some of the stories about him. 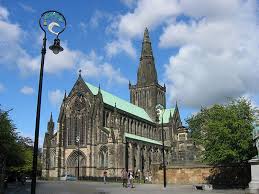 The image shown here is of the main cathedral in Glasgow (Church of Scotland – Presbyterian) which  is dedicated to St Mungo, or St Kentigern, who lived in the sixth century.

Mungo’s birth and education
The story of Mungo’s birth is that his mother Tannoch, the daughter of the Brythonic King Loth of the Gododdin region (round Edinburgh) was seduced by her intended Ewan. Discovering his daughter’s shame, Loth had her thrown down off a cliff or set adrift in a coracle. The tides and wind drove the coracle ashore at Culross and it was here in 518 that Tannoch’s son was born close to the Christian community of the aged St Serf. St Serf named him Kentigern (“head-chief”), but also gave him a second name Mungo (“my dear one”, “my darling”) and he educated him in his monastery. 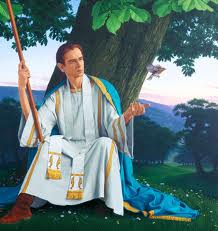 Miracle of healing
With Serf showing the boy special favour, some of the other boys out of envy killed Serf’s pet robin, tearing its head from its body and blaming Kentigern. The story is that Kentigern took the little robin in his hands and made the sign of the cross over with a prayer: the bird miraculously flew off to greet its master.

Associated places: Galloway, Cumbria, St Asaph’s
Baptised and brought up by St Serf, tradition associates Kentigern’s name with several missions or churches. The first is in Galloway where the people had fallen into idolatry after the death of St Ninian. There are dedications also to him in Cumbria. Legend has him in Wales during the time of St David and that he became abbot at Llanelwy where he installed St Asaph as his successor. Another tradition is that he evangelised in the Aberdeen area.

“Let Glasgow flourish”
But Kentigern’s (or Mungo’s) chief association is with Strathclyde and the city of Glasgow, where the cathedral popularly known as St Mungo’s commemorates him as the city’s first bishop. In the Glasgow city coat of arms, Mungo appears at the top with mitre and bishop’s crozier. A robin at the top of a tree recalls the story from his time with St Serf. The motto: “Let Glasgow flourish” used to be “Let Glasgow flourish by the preaching of the Word”, an expression that is ascribed to Mungo himself.

The story of the salmon and the ring
The theme of a salmon and a ring appears in three places in the Glasgow coat of arms. Redderech is the king who invited Mungo to come back to be bishop of Glasgow. 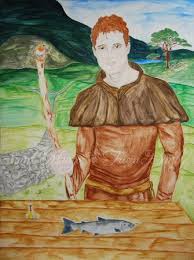 The story goes that a servant informed the king that his wife Queen Longuoreth was having an affair with a soldier of the king’s army. Not wanting to believe the story, the king, however, noticed that the soldier was wearing the ring he had given to Longuoreth on his finger. Planning to denounce his wife publicly, he invited the soldier to go hunting with him and when he got him drunk, slipped the ring off his finger and threw it in the River Clyde. The king then went back and demanded that his wife show him the ring. She could not show it, so he denounced her and put her in prison to await execution. She sent a messenger to Mungo asking for forgiveness and help. Mungo told the messenger to go fishing in the Clyde and bring back the first fish he caught. This turned out to be a salmon, which on being cut open contained the ring. Mungo sent this back to the queen, who showed it to her husband. Though he did not understand, the king duly forgave her and she then berated him for suspecting her in the first place. It was in this way that Mungo became symbolic of God’s mercy. 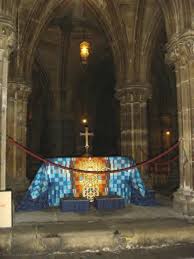 The tomb of Saint with two names:
St Kentigern/St Mungo
in Glasgow Cathedral