Summary: Joseph of Cupertino was known for his ungainly appearance and his levitations, he also had an extraordinary humility, gentleness and patience. He is a great favourite of students who find it difficult to pass their examinations. 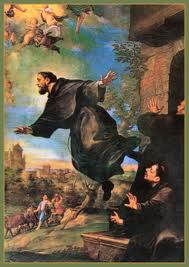 Born the son of a carpenter, Joseph was absent-minded and had such an ungainly appearance that he was given the nickname Boccaperta (“open-mouthed” or “the gaper”). He had no real academic ability, but managed to learn to read the Breviary and the Missal and get ordained as a Franciscan friar.

Levitation and desolation
He practised austerities, which soon led to him lifting off the ground up in the air – levitating. Accused by his fellow Franciscans of deception and fraud, they forbade him to say Mass in public or take any part in public ceremonies. But people came to consult him and, although wonders seemed to surround him, he felt God had deserted him. 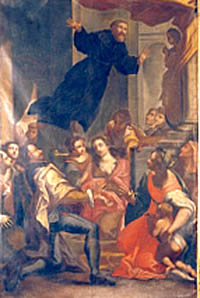 Kept in seclusion
Tried by the Inquisition, they found him not guilty of any deliberate fraud, but transferred him from the Franciscans to the Capuchins. Here his levitations were still disruptive and they kept him in seclusion. Even on his deathbed, when he heard the bell announcing that they were bringing him communion for the last time – for the last time he levitated; he rose off the bed and floated out into the hall to meet the Blessed Sacrament.

Death and beatification
After his death on 18th September 1663, there was an immediate popular upsurge of veneration for him. When the cause for his canonisation was presented almost a century later, the “devil’s advocate”, Prospero Lambertini, who was known to be most sceptical of supernatural events, declared that eye-witnesses reporting incidents about Joseph were trustworthy and that he was worthy of sainthood because of his extraordinary humility, gentleness and patience. Lambertini later became Pope Benedict XIV and beatified Joseph in 1753. He was canonised 14 years later in 1767 by Pope Clement XIII.

Patronage
Joseph is the patron of aviators and astronauts and of students who find it difficult to pass examinations.