Summary: St John of Kanty, Priest. Born at Kanty (Poland) in 1390; died at Krakow on 24 December 1473, taught philosophy, theology, and Scripture at the university in Krakow and urged his students to moderation in controversy. He was admired for his excellent teaching, for the austerity of his personal life, and for the generosity of his almsgiving. 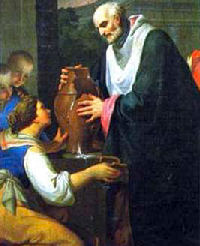 A priest at Krakow university
John was born in the village of Kanti, just south of modern-day Auschwitz in Poland. He studied philosophy and theology at the university of Krakow. He was ordained a priest soon after completing his course and became a popular lecturer there as well as an effective preacher.

He had an interest in physics and he helped develop Jean Buridan’s theory of “impetus,” which anticipated the work of Galileo and Newton. John also had a reputation for holiness, austerity (he slept on the floor and never ate meat) and for generosity to the poor.

Apart from a short time as a parish vicar, John spent most of his life as a lecturer in philosophy and theology in the University of Krakow. 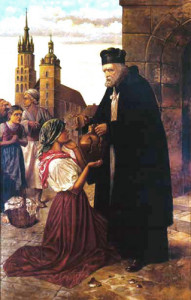 Parish priest of Olkusz
Falsely accused, he was ousted by university rivals and appointed to the parish of Olkusz. Although single-minded and energetic, he was not altogether successful as a parish priest.

Return to university
He returned to teach at the university where he spent the rest of his life, teaching Scripture. He impressed on his students the need for moderation and good manners in controversy. He was held in such high esteem at the university that for many years after his death his gown was used on degree days to vest each new doctor of the university.

Pilgrim
He made four pilgrimages to Rome on foot, carrying his luggage on his back. He also went on pilgrimage to Jerusalem, hoping to be martyred by Turks. When warned to look after his health, he pointed out that the desert fathers lived long lives in conditions that had nothing to recommend them but the presence of God.

Death and influence
John died on Christmas Eve 1473 and was canonised in 1767. He is popular as a saint in Poland and Lituania has many churches named after him among the Polish diaspora in Canada and the United States of America.