Summary : St John Damascene, Priest, Doctor of the Church. Born about 675 in Damascus (Syria); died near Jerusalem about 749. He was a Christian official in a Moslem government, became a monk and later presbyter at Mar Saba monastery near Jerusalem, where he was renowned as a theologian and biblical commentator. He was noted for his vigorous defence of the veneration of images against the iconoclasts, his theological writings synthesising the thought of the Greek Fathers, his poetry and his hymnody.

John Damascene worked as a controller of revenues for the Muslim caliph of Damascus before he retired to the wilderness near Jericho to be a monk. Best known for his writings in defence of icons, but also for his systematic theology and for hymns in honour of Our Lady.

Controller of revenues for the caliph
Islam was already well established in Syria when John, also called Monsur, was born in Damascus in 675. His father (Sergius?) was a Christian who held the post of controller of revenues at the court of the caliph Abdul Malek in the city. Christians were free to worship as long as they paid the poll tax. John was baptised and received a classical Christian education from a monk called Cosmas, whom the Arabs had brought from Sicily as a slave and John’s father had purchased for a large sum of money. John succeeded to his father’s post and worked at it until a new caliph made his position more difficult. 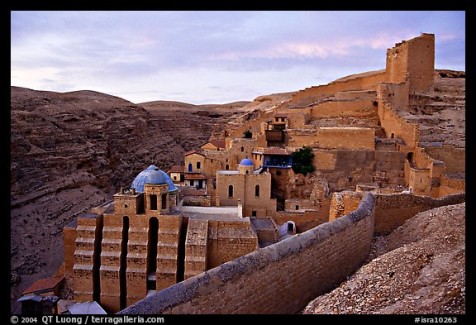 Monk at Mar Saba
Around 716 John resigned from his post, gave away all his money to his relatives and joined the monastery of Mar Saba in the wilderness between Jerusalem and the Dead Sea. Here together with a close friend also named Cosmas he spent his time composing hymns which Cosmas sang and writing theological treatises. The singing disturbed the quiet life of the monastery, but the patriarch of Jerusalem John V appreciated the pair and took them out of the monastery. He appointed Cosmas a bishop and ordained John a priest. John feared the prospect of being an administrator for the rest of his life and returned to the monastery. 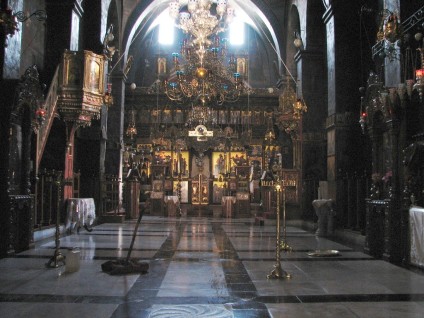 This was the time when the controversy between the iconoclasts (who opposed the use of images) and the iconodoules (who were devoted to their use) broke out. The controversy was greatly fanned by the rise of Islam which also opposed images and in 726 the emperor Leo III at Constantinople took a public stand against icons.

Arguments of John of Damascus in favour of ikons
John explained the honour given to icons like this: “Often, doubtless, when we have not the Lord’s passion in mind and see the image of Christ’s crucifixion, his saving passion is brought back to remembrance, and we fall down and worship not the material but that which is imaged: just as we do not worship the material of which the Gospels are made, nor the material of the Cross, but that which these typify.”

Second, John drew support from the writings of the early fathers like Basil the Great, who wrote, “The honour paid to an icon is transferred to its prototype.” That is, the actual icon is only a point of departure for the expressed devotion; the recipient is in the unseen world.

Third, John claimed that, with the birth of the Son of God in the flesh, the depiction of Christ in paint and wood demonstrated faith in the Incarnation. Since the unseen God had become visible, there was no blasphemy in painting visible representations of Jesus or other historical figures. To paint an icon of him was, in fact, a profession of faith, deniable only by a heretic! “I do not worship matter, I worship the God of matter, who became matter for my sake and deigned to inhabit matter, who worked out my salvation through matter,” he wrote. “I will not cease from honouring that matter which works for my salvation. I venerate it, though not as God.”

His threefold fame
John of Damascus is famous in three areas.

Firstly, he is known for his writings against the iconoclasts, who opposed the veneration of images. Paradoxically, it was the Eastern Christian emperor Leo who forbade the practice, and it was because John lived in Muslim territory that his enemies could not silence him.

Secondly, he is famous for his treatise, Exposition of the Orthodox Faith, a summary of the Greek Fathers (of which he became the last). It is said that this book is to Eastern schools what the Summa Theologica of Aquinas became to the West. Indeed St Thomas was influenced by him.

Thirdly, he is known as a poet, one of the two greatest of the Eastern Church, the other being Romanus the Melodist. His devotion to the Blessed Mother and his sermons on her feasts are well known. Three of his sermons deal with the bodily assumption of the Virgin Mary into heaven after her death.

Death and influence
John died in 749. He is appreciated for his quintessentially Catholic sacramental vision.

“The one who seeks God continually will find him,” he wrote, “for God is in everything.“

Pope Leo XIII declared him a doctor of the Church in 1890.