Beverley is a market town in the East Riding of Yorkshire, England, just north of Hull. It was recently named as the best place to live in Britain in a study by the Royal Bank of Scotland. It has an impressive Minster that owes its origin to St John of Beverley, whose bones lie under a plaque in the nave. 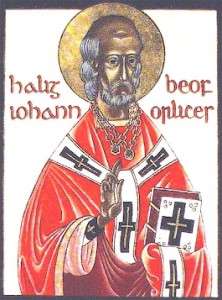 John was born of noble parents at Harpham, Humberside. He studied under St Adrian at Canterbury (died 710 – see 9th January) and then became a monk at St Hilda’s double monastery at Whitby. About 687 he was made bishop of Hexham. He was a mentor to St Bede the Venerable and ordained him deacon (692) and priest (703).

More holy man than bishop
John was more of a holy man and monk than bishop or administrator. He liked to withdraw to solitude across the Tyne, especially during Lent and he would take with him some poor person whom he would serve and care for.

Miracles of speech therapy and healing
Once in the beginning of a Lent, he took with him a dumb youth, whose head was covered with hideous scabs and scales, without any hair. The saint had a cottage built for the sick boy within his enclosure, and often admitted him into his own cell. He carried out a kind of speech therapy getting the boy to repeat simple sounds after him, gradually building up into words and sentences until the boy was able to express his thoughts for the first time. John also prayed that the remedies applied to the boy’s head would heal him, which they did and he began to grow hair (Bede, Ecclesiastical History of the English Nation, Book V). 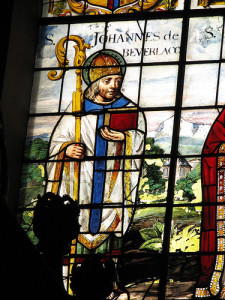 John was one of the leaders of the Northumbrian Church .

Archbishop of York and retirement
In 705 John was translated to York and Wilfrid succeeded him at Hexham as a settlement of his dispute with the Northumbrian kings. As bishop of York he founded the monastery at Beverley and retired there in 717, four years before his death. 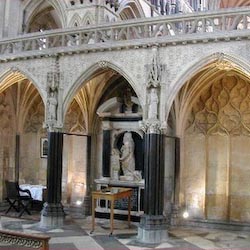