Summary: There are similarities between St John-Francis Regis SJ and the Curé of Ars, St John Vianney – holiness, devotion to prayer and pastoral care for souls.

Patrick Duffy traces his life and the connection between the two. 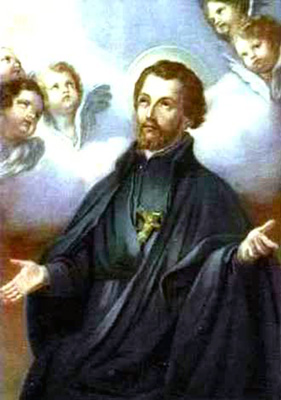 John-Francis Regis was born into a family of some wealth in the diocese of Narbonne in the Languedoc region of southern France. He was educated by the Jesuits at Beziers. At the age of eighteen, he considered becoming a Buddhist, but at nineteen he entered the Jesuit novitiate at Toulouse on 8 December 1616.

Studies in the Jesuits
After finishing his course in rhetoric at Cahors, John-Francis was sent to teach grammar at several colleges: Billom (1619-1622), Puy-en-Velay (1625-1627), and Auch (1627-1628). While he was teaching, he also pursued his studies in philosophy at the scholasticate at Tournon. He began his study of theology at Toulouse in 1628 and was ordained in 1631. During his time studying theology his room-mate became concerned he was spending much of his nights in prayer and approached his superior who said: “Don’t disturb his devotions. If I’m not greatly mistaken, this man is a saint”. 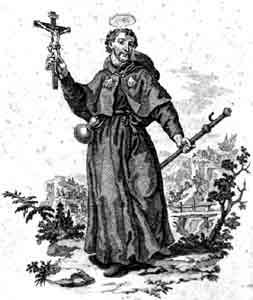 At Montpellier: an itinerant retreat-giver
The rest of John-Francis’s life was devoted to preaching missions in rural areas, part of the great effort to re-Christianise Europe after the Council of Trent. His direct way of speaking and his manifest sincerity attracted people from every class of society. For the first two years he made the Jesuit College of Montpellier the centre. He visited prisons in the afternoon and set up a committee to help in this work. He also concerned himself with rescuing women from prostitution and set up girls so they could earn an income for themselves as lacemakers.

In the Auvergne (1633-40)
In 1633, the bishop of Viviers invited him to give missions throughout his diocese. From 1633-1640 he evangelised more than fifty districts in le Vivarais, le Forez, and le Velay where church structures had collapsed. He was able to speak to the people in their own dialect which won the people’s confidence.

Longing to be a missionary in Canada
John-Francis had a longing to go with his brother Jesuits to Canada to preach to the North American Indians there, but he remained in France all his life. Often in winter he suffered many hardships in the snow as he moved around over rugged mountains. He is described as spending the day preaching on top of a heap of snow and then hearing confessions through the night.

summers in Le Puy, the chief town of le Velay where thousands flocked to fill the church to overflowing.(In picture right in Le Puy-en-Velay, we see an altar and statue of St.Jean-François Régis.)

Death and inspiration
His last retreat was during Advent at La Louvesc. He preached three times on Christmas Day and and three times the following day, then fainted while hearing confessions. He died at the priest’s house at La Louvesc on New Year’s Eve. He was just forty-three. He was canonized in 1737. The town became a great place of pilgrimage. It is even today a centre which attracts many young people to the faith. It was on a visit to this place that the Curé of Ars, St John Vianney, became convinced of his own vocation and later wrote a life of John-Francis Regis and found in it an inspiration for his own.