Summary: As a young man,  John Cassian became a monk in Bethlehem, visited the monks in the desert in Egypt and lived the experience himself for some years before eventually he founded his own monastery at Marseilles. This had a profound influence on European and Irish monasticism.

Early life: a monk at Bethlehem
It is not known exactly where John was born: some say he was from Dacia Pontica (or Dobrogea) in present-day Romania, others that he was from Provence in France. The son of wealthy parents, he got a good education: his writings show the influence of Cicero and Persius. As a youth he went with a friend Germanus to visit the holy places of Palestine. While at Bethlehem, both of them took on the obligations of monastic life.

Journeys in Egypt
After two years in Bethlehem they both journeyed for seven years through Egypt – in the Thebaid and Skete wilderness monasteries – interviewing and drawing on the spiritual experience of the monks and ascetics there. After returning to Bethlehem, they both lived the ascetic life for three years in solitude before going in 403 to Constantinople. Here Cassian was ordained deacon by Saint John Chrysostom.

To Rome and Marseilles
When Chrysostom was deposed and exiled in 403, Cassian and Germanus were sent to Rome with letters to plead Chrysostom’s case before Pope Innocent I.  Cassian was ordained a priest, and then went on to Massilia (Marseilles) where about 415 he established the Abbey of St Victor, a complex of two communities, one of men and one of women. This was first monastic foundation in the West on the pattern of Eastern monasticism. Subsequently, Cassian’s monastic model and writings greatly influenced St Benedict and the growth of Western monasticism.

etween 417-419, at the request of Bishop Castor of Aptia Julia (in Gallia Narbonensis), Cassian wrote two major spiritual works, The Institutes of those living the common life (“De institutis coenobiorum”) and The Conferences (“Collationes”). The Institutes deal with the external organisation of monastic communities based on what he had learned in Palestine and Egypt. The Conferences deal with the training of the inner man and the perfection of the heart.

Around 429 Cassian wrote a third book at the request of his friend Leo the archdeacon of Rome, who later became Pope St Leo the Great. It was called On the Incarnation of the Lord, against Nestorius. Nestorius had wanted to give Mary the title christo-tokos (christ-bearer) but not theo-tokos (giver of birth to God). Cassian stressed the unity of the two natures in the one person of Jesus and this later became the formula of the Council of Ephesus. In this book Cassian points out a link between this Nestorianism stressing the humanity of Jesus and Pelagianism which stresses human effort. Later theologians, however, labeled Cassian as “semi-pelagian” because he did stress the role of the human will, as against Augustine’s stress on the totality of grace, in moving towards salvation.

Death and influence
Cassian died at Marseilles in 435. He influenced Western monasticism, especially through Benedict. His teaching on overcoming the eight evil tendencies (See Books 5 to 12 of The Institutes)  were the inspiration behind the way the Irish monks practised asceticism, as shown in the Irish Penitentials. 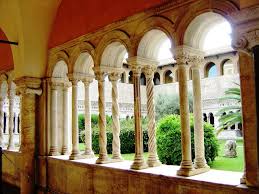 The Irish penitential system was adopted at the Fourth Lateran Council in 1215 (Photograph: Patrick Comerford)