Summary of St Jerome Emeliani: Jerome was born in Venice in the year 1486. At first he was a soldier but later left this life so as to consecrate himself to helping the poor: an he gave them all his worldly goods. He found the Order of Clerks Regular called the Somaschi to help orphan children and the poor. He died in somaschi, near Bergamo in 1537.

At first a military commander of the Venetian forces, Jerome Emiliani went on to found a congregation of priests and brothers, the Company of Servants of the Poor, later called Somaschi after the town of Somasca overlooking Lake Como where they had their main house. Because of his work with abandoned children, Jerome Emiliani is the patron saint of orphans.

Early military career
Jerome was born in Venice of the noble Emiliani family and became an officer in the Venetian army. He was in command of the fortress of Castelnuovo (Treviso) when it was captured by the League of Cambrai forces. Imprisoned, he turned in prayer to Our Lady and let go of his worldly attachments and devoted himself to God. When he miraculously escaped, he placed his chains at an altar of Our Lady in Treviso, in gratitude for his freedom from both his physical and his spiritual prison.

His return to Venice: commitment
After a short time as podestà (Venetian military commander) of Treviso, Jerome returned to his home in Venice to supervise the education of his nephews. Here he began studies for the priesthood. The war may have been over, but it was followed by famine and plague. Jerome devoted himself at this time to service of the poor and suffering. He felt a special call to help abandoned orphans. Using his own money, he rented a house for them, where he fed, clothed, and educated them.

The Company of Servants of the Poor (or Somaschi) 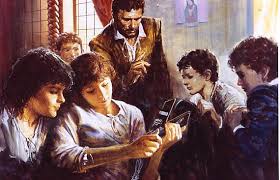 After he was ordained a priest in 1518, his contemporaries Cajetan (Gaetano da Thiene) who founded the Theatines and John Peter Caraffa (also a Theatine and later Pope Paul IV) encouraged him to found a hospital at first in Venice and then in Verona and later orphanages in Brescia and Bergamo. Two priests, Alessandro Besuzio and Agostino Bariso, joined him in his works of charity and in 1532 he founded a congregation of priests and brothers called the Company of Servants of the Poor, but were later called Somaschi from the town of Somasca overlooking Lake Como, where they had their main house. 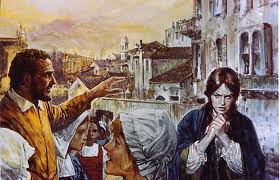 Death and influence
Jerome died in 1537 at the age of fifty-six from a disease contracted while taking care of the sick. Three years later his order was approved by Pope Paul III (Alessandro Farnese).  He was canonized in 1767 and in 1928 Pius XI declared him the patron saint of orphans and abandoned children.

Orphanis patrum
The following Latin hymn Orphanis patrum celebrates Jerome Emiliani as Father to the orphans and is an expression of the spirituality of the order he founded: