Summary: St Jeanne Delanoue is a good example of a person who has great energy in herself awaiting to be directed to the love of God and her fellow human beings.

Jeanne Delanoue was born in Saumur, Anjou, France, in the Loire valley in 1666. The youngest in a family of twelve, her parents owned a business near the sanctuary of Notre-Dame-des-Ardilliers. Jeanne was only six when her father died, and from then on she helped her mother run the store in order to maintain the family.

A woman of enterprise
Although skillful and hard-working, she was also bossy, selfish, and  looking for notice. Her mother died when she was twenty-five and Jeanne took over the business herself. As well as a drapery and a shop selling religious goods, Jeanne also provided accommodation for pilgrims visiting the shrine. So absorbed was she in making money that her shop was open even on Sundays, an unusual practice in that period.

Conversion
On Pentecost 1693, Jeanne met a poor widow and pilgrim from Rennes, named Francoise Fouchet, who foretold that she would one day spend her life in caring for the poor. Although Jeanne was already a devout enough person, she treated this prediction with skepticism. But as time passed, she began to focus more on care of the less fortunate. 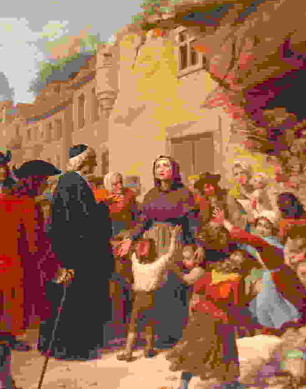 Care for those in need
Jeanne took in orphans and began living a truly spiritual life, so much so that she eventually closed the family business to concentrate more on work for others. Many doubted her sincerity, knowing her previous desire to make money. But she was not disheartened and soon other women came to join her in helping the needy. She especially cared for the distressed and abandoned, single mothers and prostitutes.

“The pig of Jesus Christ”
Famine and an earthquake caused great distress and poverty to the people of the area at that time. Jeanne sheltered many in the caves along the banks of the River Loire. With so many needing lodging, the only place for the poor were the grottos hollowed out in the tuff. She made them as comfortable as she could. Often she would sleep herself in dirty clothes, causing the remark from her director that she was “the pig of Jesus Christ”.

Foundation of a new order
An earthquake in 1703 caused a big setback, but in 1704 she founded the Sisters of Saint Anne of Providence of Samur and in 1709 the order was approved by the bishop of Angers. 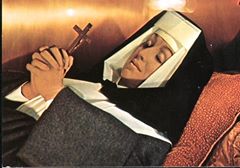 Spread of the order
Worn out by her labours, Jeanne Delanoue died on 17th August 1736 at Fencet, France, of natural causes. At the time of her death, there were twelve communities of her Sisters spread throughout France, serving the poor and needy. The order Jeanne founded was renamed Congregation of St. Anne of Providence on December 3, 1964.

Canonisation
Jeanne was canonised in October 1982 by Pope John Paul II. Today the congregation she founded numbers about 400 sisters and serves the poor in France, Madagascar and Sumatra.

Change is always possible
St Jeanne Delanoue is a wonderful example to us today of the mercy and grace of God to all of his children. She was attentive to what she thought the Lord was saying to her and responded. She gave up her self-centered ways and instead of seeking her own comfort and riches, gave herself to the love and care of those most in need.