Summary: St Gregory the Great, Pope and Doctor of the Church. Born about 540; died in Rome in 604, he founded monasteries in Rome and in Sicily. Called to be a deacon of Rome by Benedict I, then sent as papal legate to Constantinople, he was elected pope in 590AD. He reorganised Church life and administration in a time of crisis, sponsored liturgical reform, and initiated the evangelisation of the English. Known also for his extensive writings on pastoral care, spirituality, and morals, and for his self-designation as”servant of the servants of God.”

Pope St Gregory I was probably the most influential pope of the first millenium. Both a contemplative and a man of action, he established the papal states and sent missionaries to England. Along with Ambrose, Augustine and Jerome, he is one of the four ‘Fathers of the Western Church’.

Early life
Gregory was born in Rome in 540, the son of a Roman senator. He received a good education and served as an administrator in the city as his father had also done. When his father died in 573 he made over his estates to the Church and had seven monasteries founded mostly in Sicily. He turned the family house on the Coelian Hill in Rome into a monastery and spent four years there in intense asceticism and prayer before becoming a deacon and priest.

Papal legate in Constantinople
Pope Pelagius II (579-590) sent Gregory as papal legate to the court of the emperor at Constantinople. On his return after six years he became abbot of the monastery on the Coelian Hill. Three years later a flood caused the Tiber to burst its banks destroying the city’s grain stores and an outbreak of the plague. Gregory organised practical help and following this, was elected pope in 590. 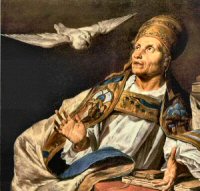 Papal states and peace initiatives
Through estates owned by the papacy he secured the Roman food supply, thus unwittingly starting the idea of the papal states. He made peace with the Lombards, who were Arians, and with the Visigoths in Spain.

Missionaries to England
In 597 AD, Gregory sent Augustine and monk missionaries to Kent in England. The story is that he was so impressed by the blond beauty of Anglo-Saxon slaves he saw for sale in the Roman forum that he had them liberated so they could be trained as missionary monks. Hence the famous saying: non Angli, sed angeli. (Not Angles but Angels)

Liturgy and writings
Keenly interested in the liturgy, Gregory composed presidential prayers (the Gregorian Sacramentary) and oversaw musical development (Gregorian chant).  He also wrote extensively: his Dialogues record the life of St Benedict and in his Moralia in Job he gives a literal, allegorical and moral exposition of the text of the Book of Job to promote Christian ethical teaching.

Influence and papal power
Only two other popes, both saints, are called “the Great” – Leo I (440-461) and Nicholas I (858-867). Gregory saw himself as the leader of a Christian society, “God’s consul”, as the epitaph on his tombstone says. But he was also the one who first applied to himself as pope the title borrowed from St Augustine, “the servant of the servants of God”. He died in 6034 AD