Saint Giles or Aegidius (640-710) was a Christian hermit, originally from Athens, but associated with Provence and the area around Marseilles in the south of France. He is often depicted with a deer. He is a patron for works of charity. Many churches throughout Europe are dedicated to him.

Patrick Duffy gives some of his history.

From Athens to Marseilles 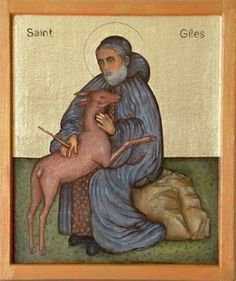 It is said Giles (or Aegidius) was born in Athens. He became so famous for giving alms and working miracles of healing that he sailed to Marseilles in pursuit of peace and a hermitage. While living as a hermit in the woods near Arles, a deer chased by a hunting party of the King of the Visigoths ran to him for refuge. A huntsman shot an arrow at the deer as it escaped into the bushes, but the arrow hit and wounded the holy man in the foot. In compensation the king offered Giles land for a monastery. This later became the famous Benedictine abbey of St-Gilles-du-Gard, a famous stop on the pilgrim road from Arles to Santiago de Compostela, thus spreading the saint’s reputation. 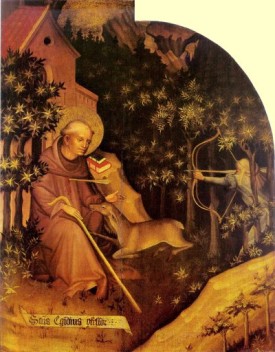 Patron saint of difficult confessions
Another story about St Giles is that Charles Martel had committed the sin of incest with his sister and was stricken with remorse before his battle with the Moors at Poitiers. Fearing to confess his sin, he presented himself before St Giles while the latter was saying Mass. During the Mass an angel placed on the altar a scroll on which the sin was written and as the Mass progressed the writing on the scroll gradually faded until it completly disappeared and Charles Martel felt himself completely absolved. This has led to St Giles being invoked for help with difficult confessions.

Reputation and influence
In medieval art he is depicted with his symbol, the deer. His emblem is also an arrow, and he is the patron saint of cripples. Giles also became a patron of beggars, blacksmiths, lepers, woods and nursing mothers. He is also invoked against cancer, epilepsy, sterility in women and night terrors and is numbered among the’ Fourteen Holy Helpers‘ initially invoked as protection against the Black Death. His cult spread rapidly throughout Europe. Many churches, monasteries and hospitas are dedicated to him in France, Spain, Germany, Poland, Hungary, Slovakia, and Great Britain. Giles is also the patron saint of the city of Edinburgh, Scotland, where St. Giles’ Cathedral is a prominent landmark.

The Benedictine monastery in St-Gilles-du-Gard is a UNESCO World Heritage Site. Its west portal is considered one of the finest examples of Provençal Romanesque.

The Community of Sant’Egidio
Giles is also, partly at least, an inspiration behind the lay movement of prayer, inter-religious dialogue and charity called the Community of Sant’Egidio in Trastevere in Rome where in 1968 a young 18-year old, Andrea Riccardi, gathered a group of high-school students like himself, to listen to and practise the Gospel. They began to provide an afternoon school for children in the slums on the outskirts of Rome. Today it has become a movement of more than 50,000 mostly lay members dedicated to evangelisation, inter-religious dialogue and charity in more than 70 countries throughout the world. 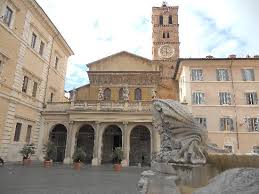 It has as its centre the Roman Church of Sant’Egidio in Trastevere, from which it takes its name. Here it maintains a continuous presence of prayer and welcome for the poor and for pilgrims.

In Dublin a small group of the Sant’Egidio is linked with St Paul’s Church, Smithfield, Arran Quay, Dublin 7, where they have an 8pm Sunday evening liturgy and an outreach to the elderly in the area.