Gerard was one of a group of thirty Anglo-Saxon monks who accompanied St Colman of Lindisfarne to Co.Mayo, Ireland.

Summary of St Gerard of Mayo, Anglo-Saxon monk
Comparatively little is known of Gerald personally – other than he was the leader of a group of Anglo-Saxon monks that settled in Mayo at the end of the 7th century and that his monastery there continued for many centuries.

Patrick Duffy records the tradition about him.

The Synod of Whitby 664
Gerald was born in Northumbria in north-east England.

He was one of a group of thirty Anglo-Saxon monks who when the decision was taken at the Synod of Whitby to adopt the Roman computation of Easter as against the Celtic custom, accompanied St Colman of Lindisfarne, the third abbot-bishop of Lindisfarne, to Ireland. Colman had vigorously advocated the Celtic mode of calculating Easter and when that synod went against him, Colman and his monks, wanting to remain part of the Celtic church, crossed over to Ireland in 668 and settled on the island of Inishboffin off the Co Galway coast. 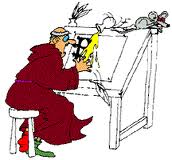 The Venerable Bede, in his Ecclesiastical History of the English People, praised the new Irish monastery of the Anglo-Saxon monks, especially the fact that the abbots of Mayo were elected, rather than following Celtic custom as a “hereditary” monastery, but studiously avoided reference to Colman and the Irish monks, whose simplicity of life and diligence in preaching the gospel at Lindisfarne he had previously commended.

Other abbeys
Gerald is also believed to have founded the abbeys of Tempul-Gerald in Connaught, as well as Teagh-na-Saxon, and a convent that he put under the care of his sister.

Mayo of the Saxons
“Mayo of the Saxons”, as it came to be known, had a great reputation for learning and documents. Alcuin of York corresponded with its abbot and monks. It had the status of an episcopal see even into the 16th century. James O’Healy, “Bishop of Mayo of the Saxons”, was put to death for the Catholic faith at Kilmallock in 1579. It was eventually annexed into the archdiocese of Tuam.