Summary:  St Francis Xavier, Priest, Missionary, Born in 1506 in Navarre (Spain); died on this day in 1552 off the coast of China. Francis met Ignatius of Loyola while both were studying in Paris and he became one of the first Jesuits. At Ignatius’ request, Francis went to Goa (India) as a missionary and travelled extensively through southeast Asia to Japan, winning converts and organising Christian communities. Francis Xavier was noted for the simplicity of his lifestyle and for his tireless missionary zeal. 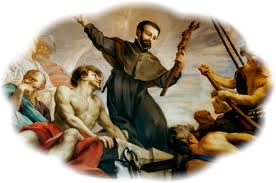 St Francis Xavier was one of a group of seven companions of Ignatius of Loyola who became the first Jesuit priests. He went as a missionary first to India, then Sri Lanka, Malaysia and Japan. He died aged 46 just before he could reach China. Pope Pius XI declared him patron of the foreign missions.

A Basque
Francis was born in 1506 in Xavier (Javier), a small village in Navarre in the north of Spain. He was a Basque, the son of local land owners. Their family home was a castle. At the age of 19 Francis went to study in Paris. There he enjoyed sports and the city’s night life. Bright and vibrant, with a great zest for life, he lacked a clear focus as to where he should invest his enormous energies.

Meeting with Ignatius of Loyola 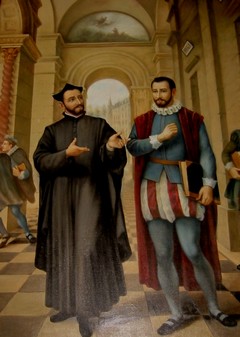 A turning point came when a fellow Basque, Ignatius of Loyola, turned up in Paris. Aged 38, Ignatius was a rather mature student and Francis ridiculed him as a middle-aged religious enthusiast. But after five years of patient encouragement Ignatius finally broke through Francis’ mask of self-sufficiency and encouraged him to ask the question, “What am I doing for Christ?”

Spiritual Exercises and ordination
Ignatius directed Francis through the Spiritual Exercises – 30 days of prayer and reflection. After this period of reflection on what was to be his own response to the love of God, Francis threw in his lot with Ignatius. With four others they formed a group of companions offering their services to God through work in the Church. In 1537 they all went to Venice where they were ordained to the priesthood, intending to go to the Holy Land. Unable to travel, they ended up in Rome. Here they worked in hospitals, looking after the sick, preaching about the love of God and begging for alms. They vowed to go anywhere the Pope would send them. Francis became secretary to Ignatius, who had correspondence with a vast number of people. This cannot have been appealing work for him.

Mission to India
When the Pope (Paul III – Alessandro Farnese) gave approval to the Society of Jesus in 1540, King John III of Portugal asked him for two Jesuits to go to India. After a delay of some months in Lisbon, Francis set out with an Italian priest and a seminarian. The voyage from Lisbon to Goa took thirteen months and he was seasick for long periods. Arriving in Goa in 1542, Francis found the Portuguese Catholics notoriously cruel to slaves, living in concubinage and neglectful of the poor. He tried to combat this by devoting himself to helping the poor and sick and zealously enouraging people to live a good life, but he found the behaviour of the Portuguese officials and traders one of the more difficult things to bear. Francis wrote: “I am so sick of life that the best thing for me would be to die for the defence of our faith: to see so many sins committed and to be able to do nothing”. Yet he continued with enthusiasm.

South India
In 1542 the Portuguese Governor of Goa asked Francis to go to teach the ethnic group called Paravas (Tamil-speaking pearl-fishers) of Cape Comorin at the southernmost tip of the Indian peninsula. They were nominal Christians who had received no formal instruction in their new faith because no priest had ever learned their language. Arriving in South India, Francis was the only European in this world of scorching heat. He set about learning Tamil and managed to translate the Creed. He experienced the loneliness of working in a foreign culture. He had been promised two Jesuit helpers, but they never arrived. After a year he decided to return to Goa to see what had happened to them. He was so accepted by the people that a number of young Paravas went with him to be trained for Christian ministry.

After seven years on the South India coast, constantly travelling up and down, preaching, teaching, consoling, comforting, begging for the poor, visiting the sick, Francis moved on to Ceylon (present-day Sri Lanka), the Malaya peninsula and and the Molucca islands, from time to time returning to visit his headquarters in Goa.

To Japan
In 1549 Francis sailed to Japan, arriving at Kagoshima, the most southerly point of Japan. Here he translated an abridged statement of Christian belief into Japanese and made a hundred converts within a year. He went on to other towns, most notably the capital Miako (now Kyoto). As he found that his external appearance of poverty met with little success, he decided to dress in fine robes, and present himself as the emissary of the King of Portugal, giving the ruler the presents the king had sent for the Emperor of Japan. This produced a different result. He was well received and given the use of an empty Buddhist monastery. Here he made about 2,000 converts. 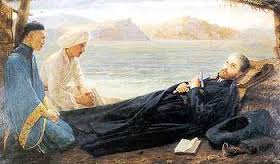 To China and death
Leaving two Portuguese priests in charge, Francis returned to Goa in 1552 and after a few months set sail for China. He did not have diplomatic support and when he became sick, he was put ashore on to Sanchian Island, the gateway to China, with only his faithful convert Anthony to care for him. He died here at the age of 46. His body was taken back to Goa where it is kept in the Basilica of Bom Jesus.

Urgency to baptise
Francis believed that those who were not baptised would not share the delights of heaven. Hence the urgency he felt to baptise as many people as possible. But although he baptised thousands, he always saw each person as a whole – body, mind and spirit – and was concerned about material needs as well as spiritual ones. When he became aware of how extensive and populous the continent of Asia was – including India, Japan and China – , he called for more companions to share the work.

Communications and isolation
Francis wrote letters to Ignatius telling all he did. These show a deep friendship which neither distance nor time apart caused to fade. Return letters took between two and four years; in his ten years away from Rome, Francis received only 5 messages. He had to rely on his relationship with God to give him the strength to carry on. There were new companions along the way, but much of the time he was alone, isolated in a country where, despite being a good linguist, he had little grasp of the local language. His mission to China was taken up again by fellow Jesuit Matteo Ricci, who arrived in China in 1582.

Canonisation and patron of the missions
Probably the best known of all Jesuits, Francis was canonised along with Ignatius Loyola, Teresa of Avila, Philip Neri and Isidore the farmer from Spain in 1622. Pope Pius XI declared him patron of the foreign missions in 1927.