Summary: There are many St Finians and at least two Movilles. The Movilla of this saint is not – as many people may think – the village of Moville in Co Donegal, but Movilla in Co Down,  just outside Newtownards. A graveyard and the ruin of a church off the B172 to Millisle show the site of his monastery. It was formerly on an inlet in Strangford Lough. This St Finian was famous as a scholar and teacher.

Patrick Duffy traces the traditions about him.

The tradition about St Finian of Moville 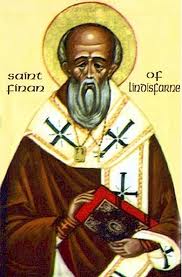 The tradition about St Finian of Moville (495-589) is that he was born near Strangford Lough in Co Down, that he studied under Saints Colman of Dromore and Mochoe of Noendrum (Mahee Island) and went to Candida Casa (Whithorn) in Scotland, from where he journeyed to Rome.

He returned from Rome with a biblical manuscript said to be an integral copy of St Jerome’s Vulgate. He was the founder and first abbot-bishop of Movilla, just outside present-day Newtownards, Co Down, where there is still a graveyard and ruin of an abbey. His most distinguished disciple there was St Colmcille. 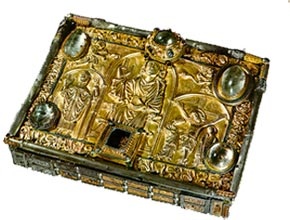 “To every cow its calf”
The story is that Colmcille surreptitiously copied the manuscript of Finian’s psalter and when Finian found out, he claimed the copy as his, bringing the case to the high-king Diarmuid MacCearbhaill. King Diarmuid’s famous judgment – “To every cow its calf and to every book its copy” – so enraged Colmcille that he had his tribesman take on the High King in the Battle of Cúl Dreimhne in 561, which led to his subsequent exile on Iona. What remains of the copy, together with the casket that contains it, is now in the National Museum of Ireland. It is known as the Cathach or “Battler”, and it was customary for it to be carried by the O’Donnells in battle. The inner case was made by Cathbar O’Donnell in 1084, but the outer is fourteenth century work.

Writings
St Finian wrote a rule for his monks, and a Penitential of Vinnian has sometimes been claimed as his.

Confusions with other saints
A saint known in Wales as St Winnin is said to be the same man. Certainly there have been confusions between him and Finian of Clonard – which of them wrote the penitential code? – and with St Frigidian of Lucca. Professor Thomas Owen Clancy of Glasgow University has suggested (2001) that the Scottish St Ninian is in reality a confusion with St Finian of Moville. He bases his thesis on the confusion of “u” and “n” in the Insular script of manuscripts. Another scholar, Pádraig Ó Riain, believes Finbarr of Cork is an alias of Finian of Movilla. The scholarly debate continues….