Summary: St Enda as far as can be ascertained, monasticism in the strict sense – of embracing vows, complete seclusion from the world and a stern system of discipline – began in Ireland” (John Ryan SJ in his book Irish Monasticism).

Patrick Duffy looks at what the traditions tell about Saint Enda. 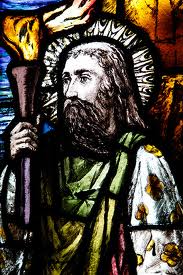 Enda succeeded to the kingdom of his father Conall Dearg of Oriel (south and mid-Ulster today), which he successfully defended against raids from neighbouring clans. On his return from a successful engagement he was passing the community of his sister Fainche and was attracted by one of her young virgins. Whether the girl died or Enda was prevented from carrying her off by his sister, he decided to embrace the monastic life and studied first at St Ailbe’s monastery at Emly. He then founded some monasteries in the Boyne valley and later studied at Ninian’s Candida Casa in Scotland, where he was ordained. These connections are not mentioned by Professor Pádraig Ó Riain in his article on Éanna in A Dictionary of Irish Saints (2011).

Foundation on Inis Mór, Aran Islands
On his return to Ireland, his brother-in-law Aengus, the king of Munster, wanted him to settle in a fertile spot in the Golden Vale, but Enda chose the lonely, unproductive Aran islands as more suitable for his ideal of the monastic life. He founded a monastery at Killeany (Cill Éanna) on Inishmore. Among those who came there for formation were Ciarán of Clonmacnoise, Jarlath of Tuam, and Carthage, who later had monasteries at Rahan and Lismore. Because of his many followers, Enda along with Finian of Clonard are regarded as the patriarchs of Irish monasticism. 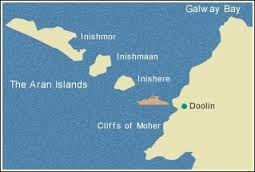 Twice mentioned in the Navigatio Sancti Brendani
Enda’s reputation was so great that Brendan the Navigator got his blessing before he set sail and was said to have discovered him (long after his death) on the Isles of the Blest.

Church dedication in Killanny, Co Louth
As well as dedications on Inishmore, there is a church dedicated to St Enda in the parish of Killanny, the only parish in Co Louth that is in the diocese of Clogher (counties Monaghan, south Tyrone, Fermanagh and south Donegal). This is probably connected with his origins in the kingdom of Oriel.