Summary: St Edmund became King of East Anglia at the age of fifteen and fought against the Danes who had invaded England. Defeated, he was captured and refusing to deny his Christian faith, he was tortured and put to death. 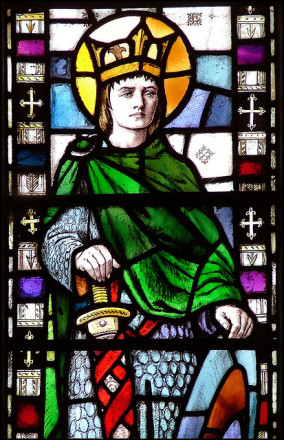 Christian king of East Anglia
Edmund was born of Saxon stock and was brought up a Christian. Though only about fifteen years old when crowned on Christmas Day 855, Edmund showed himself a model ruler from the first, treating all his people with equal justice, and known as refusing to listen to flatterers and informers. In his eagerness for prayer he retired for a year to his royal tower at Hunstanton in Norfolk where he learned the whole Psalter by heart, so he could afterwards recite it regularly.

Resisting the Vikings
In 870 two Danish chiefs Hinguar and Hubba invaded his kingdom and at first he drove them back. They withdrew to Northumbria but soon returned with greater numbers, and pressed terms upon him which as a Christian he felt bound to refuse. In his desire to avert a fruitless massacre, he disbanded his troops and retired towards Framlingham in Suffolk. The conditions of surrender the Vikings offered involved the betrayal of his people and the rejection of his Christian faith, so he refused. 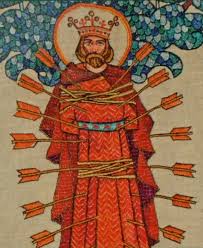 Martyrdom at Hoxne in Suffolk
Edmund was tied to a tree and whipped at Hoxne in Suffolk. He bore this torture patiently, calling on the name of Jesus. At last worn out by his constancy, the Vikings began to shoot arrows at him until his body looked like that of a hedgehog. At this stage, Hinguar commanded his head to be cut off. Edmund was 29 years old. From his first burial-place at Hoxne his relics were taken in the tenth century to Beodricsworth, since called Bury St. Edmunds, where a shrine and abbey were erected in his honour. 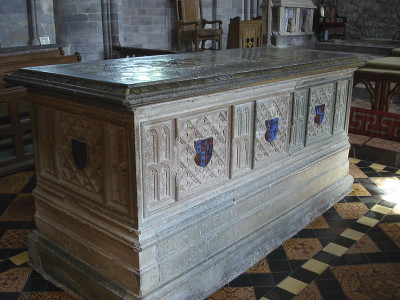 Devotion to St. Edmund the martyr became very popular in England. Many churches were dedicated in his honour. He was regarded as patron saint of England until during the reign of Henry II (1154-89), he was partly eclipsed by St Edward the Confessor (1003-66). The cult of St George came to England with knights returning from the Crusades at the end of the twelfth century and it was during the reign of King Edward III (1327-77) who dedicated a chapel at Windsor Castle to the soldier that George came to be recognised as the patron saint of the English monarchy. Currently there is a campaign to have St Edmund reinstated as England’s patron.

In art
St Edmund’s feast is observed on 20th November, and he is represented in Christian art with sword and arrow, the instruments of his torture.