Summary: St Dominic Savio is the youngest non-martyr to be officially canonised in the Catholic Church. He owes a lot to the influence of his mentor, St John Bosco, with whom he went to train for the priesthood.

His parents were poor
Born at Riva near Turin, Dominic was one of ten children of parents: Carlo, a blacksmith and Birgitta, a seamstress. Already in his home, he showed signs of unusual holiness and was serving Mass by the time he was five.

Early resolve
When he made his First Communion, at the age of seven, he wrote down his plan of life: “I will go to confession very often and go to communion as often as my confessor gives me permission. I will celebrate Sundays and feast days as holy days. Jesus and Mary will be my friends. Death rather than sin.” 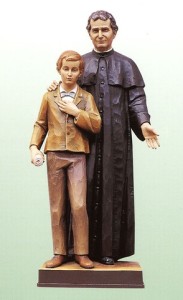 Don Bosco’s school in Turin
At twelve Dominic went to the school of St John Bosco in Turin. Don Bosco examined him for entrance and at the end of the questions, Dominic asked him: “What do you think of me?” “I think you’re good material,” said the priest smiling. “Well, then,” said Dominic, “You are a good tailor, so if the material is good, take me and make a new suit out of me for Our Lord!”

A maturity beyond his years
One day, a boy in the school was showing a magazine with immodest pictures to a group of other boys gathered round him. “What’s up?” wondered Dominic, and he, too, went to look. Just one peek was enough for him. He grabbed the magazine and tore it to pieces, saying: “Poor us! Did God give us eyes to look at such things as this? Are you not ashamed?” “Oh, we were just looking at these pictures for the fun of it,” said one boy. “Sure, for fun,” answered Dominic, “and in the meantime you’re preparing yourselves to go to hell!” “What’s so wrong about looking at these pictures anyway?” another fellow demanded. Dominic replied: “If you don’t see anything wrong, that is even worse. It means you’re used to looking at shameful things!”

Mortification
Dominic tried to do physical penances, like making his bed uncomfortable with small stones and pieces of wood, sleeping with a thin covering in winter, wearing a hair shirt, and fasting on bread and water. When his mentor Don Bosco and his confessor came to know this, they forbade it, as it could affect his health. Don Bosco told Dominic that as a schoolboy, the best penance would be to do all his duties with perfection and humility, and that obedience was the greatest sacrifice. From this time on Don Bosco notes that Dominic did not complain about the food or the weather, but bore all suffering cheerfully, and practised custody of his eyes and tongue. 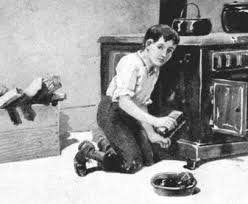 Falsely accused
One day during the winter months two boys filled the school stove with snow and rubbish. When the teacher came into the room, they falsely accused Dominic of doing the “dirty” deed. Although disciplined in front of the entire class, Dominic refused to tell on the two mischievous boys. When the truth was later revealed, Dominic was asked why he didn’t confess to his innocence. He remarked that he was imitating Our Lord, who stayed silent during his persecutions and crucifixion. He is the patron saint of those falsely accused. Dominic had many friends who really cared for him

Sodality of Mary Immaculate
In 1854, when Pope Blessed Pius IX proclaimed the dogma of the Immaculate Conception, Dominic consecrated himself to Mary. In 1856 he set up the Sodality of Mary Immaculate with a group of his friends, to carry out apostolic work together. Don Bosco’s mother (Mamma Margaret), who had come to Turin to help her priest son in his school, said one day: “You have many good boys, but none can match the good heart and soul of Dominic Savio. I see him so often at prayer, staying in church after the others; every day he slips out of the playground to make a visit to the Blessed Sacrament. When he is in church he is like an angel living in paradise.”

Death at fifteen
Just a month before his fifteenth birthday Dominic developed tuberculosis and was sent home to recover. On the evening of 9th March, he asked his father to say the prayers for the dying. His face lit up with an intense joy and he said to his father: “I am seeing most wonderful things!“ These were his last words. 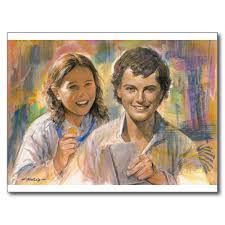 “Small in size, but a towering giant in spirit”
Dominic’s remains are in the Basilica of Mary Help of Christians, built by Don Bosco in Turin as the headquarters of his Salesian order.

Don Bosco wrote his Life, which paved the way for his beatification in 1950 and his canonisation in 1954.

Pope Pius XI, who declared him “venerable” in 1933, described him as “small in size, but a towering giant in spirit.”