Summary: St Declan of Ardmore: Declan, of noble blood, is considered to be one of the pre-Patrician saints. Colman, a local priest, baptised him. Later he went to Europe to continue his studies where he was ordained priest and possibly bishop. He settled in Ardmore (Waterford) and evangelised the Decies territory.

Patrick Duffy reviews the traditions about him. 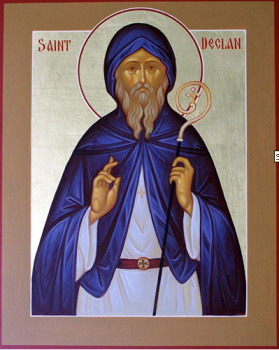 The Ardmore peninsula in west Waterford contains many ecclesiastical monuments that testify to the high esteem in which Saint Declan was held. He is called “the Patrick of the Déisí”.

Traditional or alternative narrative?
The traditional narrative about the coming Christianity to Ireland is that St Patrick, the “apostle” and patron saint of Ireland, converted the whole country to Christianity in the fifth century. Most of the stories about Patrick are located in the northern half of the country.

But there is a strong alternative narrative that holds that Christianity had come to the south of Ireland even before Patrick began evangelising, most likely through contact with Wales or Gaul during the early part of the fifth or even at the end of the fourth century. The four saints included in this narrative are: Saints Ailbe of Emly, Declan of Ardmore, Ciaran of Saighir and Ibar of Begerin.

Declan came from the royal house of the Déisí and probably studied in Wales or in Gaul. According to the Life, whose literary genre is primarily hagiographical and is not without tendentious assertions and inconsistencies, he visited Rome.

…he received marks of honour and sincere affection from the people and clergy of Rome when they came to understand how worthy he was, for he was comely, of good appearance, humble in act, sweet in speech, prudent in counsel, frank in conversation, virtuous in mien, generous in gifts, holy in life and resplendent in miracles.

Strong link between Ailbe and Declan
The Life also presents Ailbe (of Emly – see 12th September) and Declan as having a great bond of affection: “they loved one another like brothers”. They even meet together in Rome and are made bishops there before returning to Ireland. As Declan is coming home, on the road through Italy he meets Patrick (on his way to Rome and not yet a bishop). Patrick and Declan along with Ailbe meet up again at Cashel where their respective areas of influence seem to have been sorted out before King Aengus.

Reflecting 12th century concerns
The relationships of these famous representative bishops is put into a rann or stanza in the Life:

But it may well be that the concerns that underlie the rann reflect a later sorting out of diocesan jurisdictions contemporary with the time of writing of the Life (12th century). At that time Armagh was given the primacy, Emly became the leading ecclesiastical centre in Munster and Ardmore, Lismore and Waterford were coming together as one diocese.

Legendary generosity
Declan’s generosity was proverbial and beggars followed him wherever he went. In his last days he sought refuge “in a narrow place beside the sea” – called Declan’s Desert – and it was there he died on the 24th July. The day is still kept as his “pattern”.

A most remarkable group of ancient ecclesiastical remains is still visible today in Ardmore – a beautiful round tower, a ruined cathedral, the ruins of a second church beside a holy well, a primitive oratory and some ogham-inscribed pillar stones.