Cyril of Jerusalem is most famous as the author of the Mystagogic Catecheses, that is, sermons given to newly initiated adults to enable them reach a full understanding of the “mysteries” or “sacraments” they received. He also wrote a defence of orthodox doctrine about Jesus against Arianism.

Patrick Duffy tells his story and gives two significant quotes from his work on how we ought receive the Body and Blood of Christ. 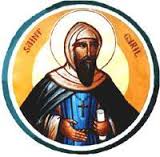 Cyril was ordained deacon, in 335, by Bishop Makarios, and priest, in 345, by Bishop Maximus, and became a bishop three years later. Initially he was supported by the Arian bishop, Acacius of Caesarea, who was his metropolitan.

Accusations
However, Bishop Acacius of Caesarea brought accusations against Cyril that he sold gifts the emperor had given to the Church to raise funds to feed the poor; some of the vestments the emperor gave were reported seen as clothing for actors!

Exile
It was also seen that, contrary to what had been thought, Cyril was not on the side of the Arians, but of orthodox doctrine. Acacius and his Arian bishops summoned a council to which Cyril did not come, condemned him and had him exiled from Jerusalem. Even though he was later re-instated, he was exiled once again by the Arian-sympathising emperor Valens.

Attended the Council of Constantinople 381

Finally, however, under the orthodox Catholic emperor Theodosius,  Cyril was recalled in 379 and attended the Council of Constantinople, which further condemned Arianism and strengthened orthodox doctrine.

Influence
Pope Leo XIII named Cyril of Jerusalem a doctor of the Church in 1883. His Mystagogical Catecheses have had considerable influence in drawing up the revised Rite of the Christian Initiation of Adults (RCIA) after the Second Vatican Council and promulgated by Pope Paul VI in 1972. Below are two extracts from Mystagogical Catechesis V, one on receiving the Body of Christ, the other on receiving the Cup of His Blood. These extracts inspired the restoration of the practice of the faithful receiving Communion in the hand and partaking of the Blood of Christ from the chalice.

Receive the Body of Christ: Amen
“Approaching, therefore, come not with your wrists extended, or your fingers open; but make your left hand as if a throne for your right, which is on the eve of receiving the King. And having hallowed your palm, receive the Body of Christ, saying after it, Amen. Then after you have with carefulness hallowed your eyes by the touch of the Holy Body, partake thereof; giving heed lest you lose any of it; for what you lose is a loss to you as it were from one of your own members. For tell me, if any one gave you gold dust, would you not with all precaution keep it fast, being on your guard against losing any of it, and suffering loss?  How much more cautiously then will you observe that not a crumb falls from you, of what is more precious than gold and precious stones?” (MC V, 21)

Approach also to the Cup of His Blood: Amen
“Then after having partaken of the Body of Christ, approach also to the Cup of His Blood; not stretching forth your hands, but bending and saying in the way of worship and reverence, ‘Amen, be hallowed by partaking also of the blood of Christ.’ And while the moisture is upon your lips, touching it with your hands, hallow both your eyes and brow and the other senses. then wait for the prayer, and give thanks unto God, who has accounted you worthy of so great mysteries.” (MC V, 22)