A hundred kilometre walk, known as St Cuthbert’s Way, connects Melrose Abbey in southern Scotland through the Borders country to the Holy Island at Lindisfarne in north-east England.

Patrick Duffy tells the story of the saint who gave his name to this Way and is so popular in that area and how he became the protector of the eider ducks!

A native of the Lammermuir Hills

Cuthbert was a native of the Lammermuir Hills, between Lothian and the Scottish Borders. He was familiar with the monks Eata (abbot) and Boisil (prior) of the monastery of Melrose. But he spent some years as a soldier fighting for the kingdom of Deira against the kingdom of Mercia until one day he rode into the monastery on horseback with spear in hand. He had decided to became a monk (651).

Ripon
Cuthbert’s fame for piety, diligence, and obedience quickly grew. When Alchfrith, king of Deira, founded a new monastery at Ripon, he brought Eata from Melrose as prior and Cuthbert went with him as his guest-master. After some time, when Roman usage was being imposed in place of Celtic practice at Ripon through the influence of St Wilfrid, Cuthbert and the monks, who followed the Celtic tradition, returned to Melrose (661). 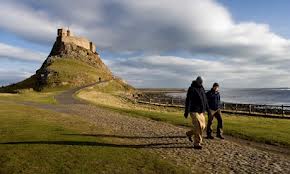 In Scotland
While back in Melrose, Cuthbert travelled preaching the gospel among the people from Berwick to Galloway and had a reputation for working miracles. Illness struck the monastery in 664. Both Boisil and Cuthbert suffered from the plague. Boisil died. Cuthbert recovered and became prior at Melrose in his place.

Hermit’s life and care for the wild life
In 676 Cuthbert resigned as prior and became a hermit on Inner Farne. At first he received visitors and washed their feet, but later he confined himself to his cell and opened the window only to give his blessing. While on the Farne Islands, Cuthbert instituted special laws to protect the eider ducks and other seabirds nesting on the islands; these may have been the first bird protection laws anywhere in the world. Consequently, eider ducks are often called ‘cuddy ducks’ (Cuthbert’s ducks) in modern Northumbrian dialects.

Bishop of Lindisfarne
In 684, Cuthbert was elected bishop of Lindisfarne, and was consecrated at York by Archbishop Theodore of Canterbury and six bishops, on 26th March 685. After two years, however, he returned to his cell on Inner Farne Island (two miles from Bamburgh, Northumberland), where he eventually died. He was buried at Lindisfarne.

His influence
Eleven years later his body was found incorrupt and put in a shrine in the church, but when the Vikings invaded in 875, the monks fled carrying Cuthbert’s body with them to Melrose. His final resting place, however, became Durham cathedral, where his grave is sealed with the name in Latin CUTHBERTUS. He is regarded as the patron of Northumbria and of the Catholic Diocese of Hexham and Newcastle. Many churches were dedicated to him and he is reckoned to be the second most popular indigenous saint in Britain, after St Thomas Becket. 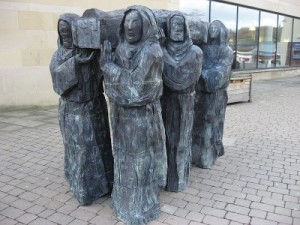