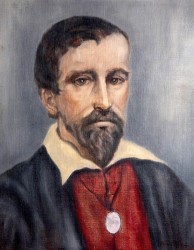 Mayne was born at Yorkston, near Barnstaple in Devon and baptized on St Cuthbert’s Day, 20th March, 1543. He grew up in the early days of the Boy King Edward VI with an overtly Protestant government installed.  Cuthbert’s uncle was a former Catholic priest who favoured the new doctrines and it was expected that Mayne, a good-natured and pleasant young man, but with no great thought of principles of any kind, would inherit his uncle’s benefice.  Educated at Barnstaple Grammar School and ordained a Protestant minister at the age of nineteen, he was installed as rector of Huntshaw, near his birthplace. There followed university studies at Oxford, first at St Alban’s Hall, and then at St John’s College, where he was made chaplain, taking his BA in 1566 and MA 1570.

A convert to Catholicism
It was in Oxford that Mayne made the acquaintance of Edmund Campion (see 1st Dec), who at that time was still a Protestant like himself, and a Catholic, Dr Gregory Martin. Mayne became convinced of the truth of the Catholic faith and converted to Catholicism. Late in 1570, a letter addressed to him from Gregory Martin fell into the hands of the Anglican Bishop of London and officers were sent at once to arrest him and others mentioned in the letter. Mayne evaded arrest by going to Cornwall and from there went in 1573 to the English College at Douai.

Returns to England as a Catholic priest
Ordained a Catholic priest at Douai in 1575, he left for the English mission with another priest, John Paine, and took up residence in the guise of an estate steward with Francis Tregian, a gentleman, of Golden, in St Probus’s parish, Cornwall. Tregian’s house was raided and the searchers found a Catholic devotional article (an Agnus Dei symbol) round Mayne’s neck and took him into custody along with his books and papers. Imprisoned in Launceston jail, the authorities sought a death sentence but had difficulty in framing a treason indictment, but five different charges of contravening the Act of Supremacy were brought against him. 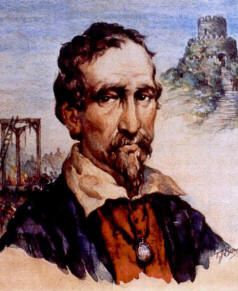 The trial judge directed the jury to return a verdict of guilty and he was sentenced to be hanged, drawn and quartered. Mayne responded, ‘Deo gratias’. Francis Tregian was also sentenced to die, but in fact he spent 26 years in prison.

Two nights before his execution, Mayne’s cell was reported by his fellow prisoners to have become full of a “great light“. Before his execution, some Protestant ministers came to offer him his life if he would acknowledge the supremacy of the Queen as head of the church. His reply was to kiss his Bible and say: “The Queen neither ever was, nor is, nor ever shall be head of the Church of England”.

Execution
Mayne was executed in the market place at Launceston on November 29, 1577. He was not allowed to speak to the crowd, but only to say his prayers quietly.
He was the first martyr not to be a member of a religious order.
He was the first “seminary priest”,  who were not trained in England but in houses of studies on the continent, as distinct from those who were (“Marian priests”).