Comgall who died in 603 was an inspiration of the 'peregrinatio pro Christo' movement. 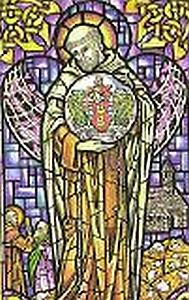 St Comgall founded his monastery at Bangor, Co Down, and he still appears at the top of the town’s official coat of arms, . When the senior lecturer of his monastery, Columban, at the age of fifty went as a wandering missionary with a group of twelve to Europe, this started a trend of monks going into voluntary exile for Christ to Scotland and to the European continent (peregrini pro Christo). Patrick Duffy tells his story.

Birth
Comgall was born in the Dal Riada area of the north-east coast of Ireland (Co Antrim) about 517. Magheramorne near Larne lays a claim to being his birth-place.

Soldier and monk
His father was a soldier and he himself became one for a while before going for training as a monk with the ascetical St Fintan at Clonenagh in Co Laois. He also studied at Clonard with Finian and at Clonmacnoise with Ciaran. We next find him practising the monastic life on an island in Lough Erne where he was ordained a priest by Bishop Lugidius.

Monastic centre at Bangor
In 555 Comgall founded his own monastery at Bangor, Co Down. This soon became the largest monastic centre in Ireland with several daughter houses and a total population of around 3,000. He successfully combined the austerity of Fintan with the scholarship of Finian.

In Scotland
Comgall is said to have been friends with Brendan of Ardfert and Clonfert, with Canice of Dungiven, Aghaboe and Kilkenny and with Colmcille who founded monasteries in Ireland and at Iona in Scotland. Comgall went for some time to Scotland and is associated with Colmcille and Canice in their visit to King Bruide of the Picts at Inverness. He is said to have founded his own monastery on the island of Tiree, which was attacked by the Picts in 564.

Anamchara
Central to Comgall’s teaching was his strong advocacy of the anamchara or “soul-friend”. When Colmcille died, Comgall is recorded as saying: “My soul-friend has died, and I am without a head; for a man without a soul-friend is a body without a head”.

Miracles concerning sight
Miracles claimed for Comgall concern the sense of sight: he once healed a blind man by smearing saliva on his eyes and another time he caused blindness to fall on some thieves.

Disciples in Scotland
Two of Comgall’s disciples from Bangor went to evangelise in Scotland where they founded monasteries – Moluag on the island of Lismore in Argyll and Maelrubha further north at Applecross in Ross.

And in Europe
In 590, another disciple, Columban, who was the senior lecturer at Bangor monastery, set sail with twelve companions from Bangor for Gaul in ‘voluntary exile for Christ’ (peregrinatio pro Christo). Columban founded monasteries on the continent at Luxeuil in Burgundy and Bobbio in Italy. Gall’s foundation gave its name to the Swiss town of St Gallen. 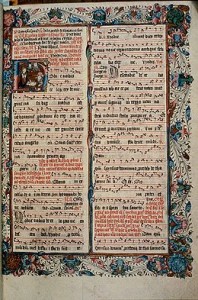 Death and influence
Comgall died at Bangor in 603 and his relics were kept there till in 822 they were scattered by Viking raiders. He was an inspiration of the peregrinatio pro Christo movement. His figure as a monk still appears at the top of the coat of arms of Bangor town