Summary: St Columban, Abbot, Missionary. Born in Leinster (Ireland) about 543; died on this day in 615 at Bobbio (Italy). A monk and teacher at Bangor until middle aged who left with twelve companions as “exiles for Christ” to found monasteries in Burgundy (France). He maintained strict Celtic customs and usages, was expelled for denouncing royal misconduct but went on to extend the Irish mission through the Alps and into Italy. Author of a monastic rule and a penitential. Noted for his austerity of life, his missionary energy, and his role in the development of individual reconciliation.

good education in the Bible, classical authors and the Latin Fathers. Finding that girls were distracting him from his studies, a woman hermit advised him to become a monk. After some time with Sinell at the Lough Erne island of Cluain Inis, his major formation was under St Comgall at Bangor, where he spent many years teaching before setting on his wanderings for Christ, probably in 590. Patrick Duffy tells Columban’s story.

Formation by Sinell at Cluain Inis and Comgall at Bangor

Already a monk at Bangor Columban set out from there with twelve companions as a wandering pilgrim for Christ. Passing to mainland Europe, he had enormous influence by setting up monastic foundations in France and Italy. A vibrant missionary society serving in fourteen countries worldwide today bears his name – the Columban Missionaries. 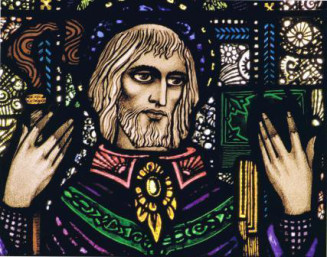 Saint Columban, abbot: “Seek then the highest wisdom, not by arguments in words but by the perfection of your life, not by speech but by faith that comes from God.

In the kingdom of the Franks Columban travelled with a group of companions by sea and land across Cornwall, the English Channel, Brittany and pressed on in a south-easterly direction into the kingdom of the Franks, by then partitioned (since 561) and thoroughly lapsed from its earlier Christianity under Clovis (d. 511) and his his queen, St Clotilde.

The Irish monks found paganism, witchcraft, magic, and brutal ritual murder rife. On their way they had visited the court of King Childebert II of Austrasia (now roughly = Alsace) and then being given an old Roman fort at Annagray, in the foothills of the Vosges mountains, they established their first monastery. Soon they founded another eight miles to the west at Luxeuil.

Conflict with Frankish bishops
Their austere way of life, codified in Columban’s own Rule, attracted many followers, but their Irish customs, with a bishop subordinate to the abbot, a different date for Easter, and the Irish tonsure across the front part of the head, and some very penitential practices based on those of the desert fathers, all annoyed the Frankish bishops, who summoned Columban to explain himself at a synod. Regarding them as negligent and lax, Columban refused to attend, but wrote them a letter effectively suggesting that they were bothering about trifles and should leave him, “a poor stranger in these parts for the cause of Christ”, and his monks in peace.

Here the abbot and his monks led the simplest of lives, their food often consisting of nothing but forest herbs, berries, and the bark of young trees. The fame of Columbanus’s sanctity spread far and wide.

But the bishops renewed their attacks, concentrating on the Easter question, and Columban wrote to Pope St Gregory I asking for confirmation of the validity of his tradition. Gregory sent him  a copy of his Pastoral Care and advised him consult the Abbot of Lerins.

A kind of truce ensued for some years, followed by renewed attacks and a fresh appeal for tolerance. The Irish introduced a practice of confession with the imposition of harsh penances according to a Penitential Book compiled by Columban. 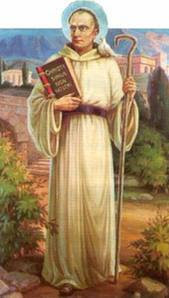 Writes to Pope Gregory
But the bishops renewed their attacks, concentrating on the Easter question, and Columban wrote to Pope St Gregory I asking for confirmation of the validity of his tradition. Gregory sent him  a copy of his Pastoral Care and advised him consult the Abbot of Lerins. A kind of truce ensued for some years, followed by renewed attacks and a fresh appeal for tolerance.

Conflict with the Burgundian royal family

Columban then fell foul of the Burgundian royal family. The king respected him and used him as an adviser, but Columban could not tolerate the fact that the king kept concubines. He refused to bless the king’s illegitimate children. This incurred the wrath of Theodoric’s formidable grandmother, Brunhilda, who exercised a matriarchal rule and did not want Theodoric marrying and so introducing a legitimate queen who might be a rival. She harrassed the Irish monks until they were forced to leave the kingdom, though the Franks who had joined their monasteries were allowed to stay.

Deported… but sailed up the Rhine
Columban and his Irish compatriots first tried to settle at Tours but were were forced under military escort to Nantes, to be deported back to Ireland by sea. Their ship ran into a fierce storm and was forced to turn back. They then crossed Gaul once more, but by a more northly route, to Metz, where the Austrasian king, Theodebert II, received them kindly. Finally they rowed up the Rhine in the depths of winter, hoping to settle at Bregenz on Lake Constance, but the excessive zeal of their preaching made them enemies, and when Austrasia and Burgundy went to war and Austrasia was defeated, Columban moved on. 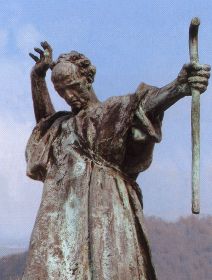 Columban, God’s wanderer and fierce defender of the faith.

Into Italy
By now aged about 70, he crossed the Alps to Milan, leaving his disciple in Gall and some other monks behind, after what may have been a quarrel. He was well received by the king of Lombardy, an Arian, though his wife and children were Catholics. He found himself caught up in the complex doctrinal issue of the writings (and writers) known as the Three Chapters, about which he knew little. Persuaded by the king’s wife, a passionate defender of the Three Chapters, he wrote a letter to Pope Boniface IV, ostensibly in their defence, but actually defending the orthodoxy of his own position: “We are disciples of Saints Peter and Paul and all the disciples who by the Holy Spirit wrote the divine canon. No one of us has been a heretic, no one a Jew, no one a schismatic… the Catholic faith is maintained unchanged.”

Death and influence
The royal couple gave Columban land at Bobbio, in an Apennine pass between Genoa and Piacenza, and here he built his last monastery. Invited to return to the Frankish kingdom, he declined, now nearing death. 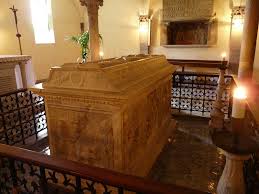 He died at Bobbio on 3 November 615 and was buried there.

The next abbot commissioned a monk named Joncas, who had joined the abbey three years after Columban’s death, to write his Life. Joncas completed this with the help of many who had known him. Over the centuries Bobbio acquired a great library and became a major influence on learning in northern Italy until the 16th century. It was finally suppressed by the French in 1803. Columban’s foundation at Luxeuil also flourished until the French Revolution.

Columban Missionaries today
In 1918 a missionary society under the patronage of St Columban was founded from the Irish seminary of St Patrick’s College, Maynooth sending missionaries especially to China. There are presently over 500 Columban priests of ten nationalities and many lay missionaries in the Society ministering in 14 countries.