Summary: St Columba, abbot, missionary also known as Colum Cille, was born in Gartan, County Donegal in 521 and was of royal lineage. He studied under Finnian of Moville and Finnian of Clonard. He founded monasteries in Deny, Durrow, Iona and possibly Kells. From Iona, which became his principal foundation, missionaries undertook the conversion of Northumbria. Colum Cille is noted for his love for people and for all living creatures. He died in 597. 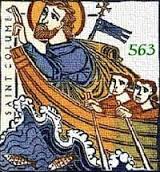 While his feast-day 9th June passes most years without any great sense of occasion, St Columba is in fact one of the Irish Church’s most significant saints, writes Fr John R Walsh.

Columba, the greatest and earliest of our missionaries, is one of the Patron Saints of Ireland. He was born at Gartan, Co Donegal, on 7 December 521 to parents, Fidlimid and Eithne, who were both of royal descent. Usually designated in Irish, Colum Cille (“dove of the church”), the future saint was given his early education by Cruithnechan, a priest who lived near Kilmacrenan in the same region.

Columba’s mother Eithne, a princess from Leinster, where Christianity was comparatively well established, was doubtless the inspiration for her son’s early identification with the Church.

He became a pupil of St Finnian of Clonard, and later studied for the priesthood under St Mobhi of Glasnevin. It was from there that he returned north in 546 to found a monastery in Derry. He is credited, too, with later establishing another major Irish foundation at Durrow, Co Offaly.

In 563, Columba and twelve companions sailed from Derry via Moville to the island of Iona to establish a new monastery there. This became a base for the conversion of the heathen part of Scotland, peopled by the Picts. St Adomnán, who wrote his Life of Columba in Iona within a century of the saint’s death, gives Columba’s reason for exile as a desire to be “a pilgrim for Christ”.

Iona is a small island south-west of the larger Mull, about eighty miles north of Co Antrim. In Columba’s time, it lay within the Irish territory of Dál Riada, which was divided by the North Channel between Ireland and Scotland.

Using Iona as a base, Columba set up other foundations with the support not only of the Dál Riada but also of Pictish chieftains, with whom he established good relations. Some authorities suggest that he founded thirty establishments in the Hebrides and along the west coast of Scotland, including monasteries on Hinba, Tiree and Skye. It is more likely that disciples of the saint set up these houses in the decades and centuries after his death. They would, then, have belonged to the paruchia Columbae (the federation of Columban religious houses) in Ireland and Britain.

For Columba, personal sanctification took precedence even over preaching the Gospel. Monastic life in Iona was identical to that at home in Ireland: work, mortification, prayer, study, and copying manuscripts, were the order of the day. 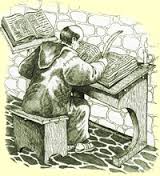 Columba was known to be a calligrapher. The Cathach, the earliest surviving manuscript we have in Ireland, probably issued from his pen. He was also the author of a number of Latin hymns, and had a reputation for miracles and visions, as well as prophecies.

Because of Columba’s position and temperament, he was a major figure in the political life of Dál Riada. He certainly played kingmaker in 574, on the death of the king of Dál Riada. His attendance at the important convention of Druim Cett, near Limavady in 575, was as a senior authority on Dál Riada affairs.

This assembly at Druim Cett not only rationalized relations between the two parts of the territory but regularized the position of the filid, the learned class of poets, who preserved oral history and genealogy. As a politician, Columba is held up as an example to present day seekers of reconciliation and accommodation.

By the time the saint died in his 77th year, on Sunday 9 June 597, his work of preaching Christ to the Picts was well in hand. The monastery at Iona had become the supreme Christian centre in Scotland. Columba’s disciples, too, were to play an important part in the evangelizing of Britain through foundations in Lindisfarne, Northumbria, on the east coast, and at Whitby.

In his steadfastness, energy, piety and humanity, Columba represents the early Irish Church better than any of his peers. A man of outstanding gentleness and empathy, he was a kindly individual with a practical concern for people. His biographer recalls how he helped the unfortunate; interested himself in the plight of a hostage; rehabilitated a reformed robber; cured a nun with a broken hip; assisted a woman in the pangs of child-birth with his prayers; provided destitute men with the means of feeding themselves. Even as his death approached, he comforted others rather than seek to be comforted. 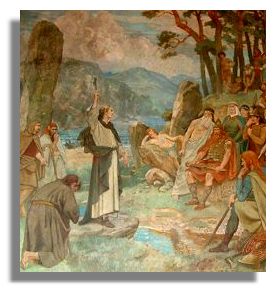 Columba and his Monks Apostle of the Scots

Columba had a profound sense of the worth of each person and of the contribution each makes to society. At one with God, he was also at one with nature. Like all genuine followers of Christ, Columba could see through hypocrites. He did not tolerate evil-doers, though he invariably welcomed and reconciled the truly repentant. And so we find him castigating miscreants, and yet welcoming the sincerely contrite. Above all, Columba was a man of prayer.

Coming as he did from a princely background and having a commanding and practical personality, he was bound to make an enormous impact on the affairs of his generation. His real greatness, however, was that he was able to combine the advantages given him by temperament and birth with the ambition of sainthood.

Columba is remembered with particular affection in the three places where he himself founded monasteries – Derry, Durrow and Iona – and in the areas in Ireland where his followers established houses. Some of the most notable of these later foundations were Kells, Swords, Drumcliffe, Moone and Tory.

This article first appeared in The Word (June 2004), a Divine Word Missionary Publication.