Summary of St Colman, bishop:Colman (Mocholmoc) of Dromore, County Down, is said to have studied under Caetan of Nendrom He was persuaded by Mac Nissi to settle at Dromore around 514. His cult is also found in Scotland and Wales. 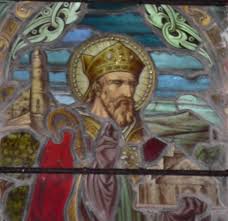 St Colman of Dromore, in the Lagan valley of Co Down, Northern Ireland, set up a monastery here at the beginning of the sixth century. The present diocese of Dromore, however, has its seat in the south Co Down city of Newry.

Patrick Duffy writes about the saint and the diocese.

Many St. Colmans
There are about 300 saints named Colman mentioned in Irish martryologies, the most famous of them being those of Cloyne, Dromore, Kilmacduagh and Linsdisfarne. Pádraig Ó Riain names and writes about sixty of these in his Dictionary of Irish Saints.

Dromore is situated on the Belfast to Dublin road in the north east corner of Co Down. The River Lagan flows through the town. Colman of Dromore is linked with a monastery established there in the early sixth century, sometime between 497 AD and 513 AD

Mocholmog
He is also known as Mocholmoc, or Mocholmog -“my dear little Colum”(as St Aidan of Ferns is known as Mogue = Mo Aodh Óg = My little Aodh).

Student at Nendrum
Colman was a student at the monastic school of Nendrum, located on Mahee Island in Strangford Lough. Mahee is a version of Mochay, the name of the master of the school, who was also called Coelan or Caetan. It is possible that this Mochay was a disciple of Patrick himself.

Training at Emly and apprenticeship at Mochay
Colman went to perfect his knowledge of the Scriptures at the school of St Ailbe at Emly in south Tipperary, where he stayed some years (perhaps around 470 or 475). He returned to Nendrum and acted for some time as assistant to Mochay.

Foundation at Dromore
Colman sought advice about his future career from his friend, Aengus MacNissi. MacNissi, who had been baptised by Patrick and founded the church of Connor, replied: “It is the will of God that you erect a monastery within the bounds of Coba plain”. So Colman established his community by the River Lagan which passes through Dromore. 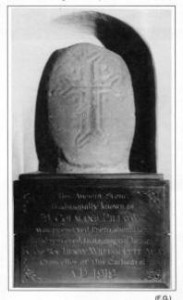 The first mention we get of Colman of Dromore is in the Acta of St. Coelan .

Link with St Patrick
But this location at Dromore probably also had some relation with St Patrick. There is a legend that when St. Patrick was travelling from Armagh to Saul, he celebrated Mass in a church four miles from Dromore (probably Donaghcloney). He saw through the east window a vision of angels who told him that he should have a bishop to rule this flock and establish a monastery on the spot.

Finian of Movilla, a renowned pupil
The most famous of Colman’s pupils was St Finian, who later established a monastery at Maigh Bhille (“plain of the ancient tree”) or Movilla on Strangford Lough.

power. During the Protestant Reformation and the confiscation of Catholic Church property, Catholicism had to go underground. The Plantation of English and Scottish settlers ensured a Protestant majority in that area and Dromore Cathedral was held by the Anglican (Protestant) Church of Ireland . So the town of Newry in South Down, which had become a centre of Catholic population, was where a new Catholic cathedral was begun in 1823. It was dedicated to St Patrick and St Colman in 1919.