Summary: St Colman, Bishop Colman mac Lenine was born around 530, probably in West Cork. A bard by profession, he is reputed to have been influenced by St Brendan to become a priest. The main field of his apostolate was east Cork, where his chief foundation was in Cloyne. He died in 606.

The diocese of Cloyne had its beginnings in the monastic settlement of St. Colman, son of Lenin, at Cloyne in east Cork. A round tower and pre-reformation cathedral (now Church of Ireland) still stand at the site. 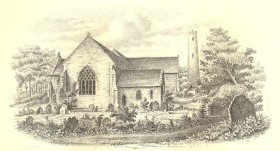 The Catholic Cathedral of St Colman at Cobh was begun in 1868. It completed in the early years of the 20th century.

Patrick Duffy records some of the facts about the saint.

In the Martyrology of Oengus
Oengus has a reference to Colmán of Cloyne for the 24th November. He describes him as “the son of Lenin the vehement”. It is said he was 9th in descent from the kings of Munster and that he was born in Cork.

Bard at the court of the King of Munster
Colman trained for twelve years as a bard and became the Royal Bard of Munster at the court of King Aodh Caomh at Cashel. This would have made him historian, genealogist, geographer and chronicler to the Munster kings. Brendan (of Birr? / or Clonfert?) and he were said to have settled a dispute about the succession that led to the inauguration of King Aodh Caomh. When Brendan visited Cashel for the inauguration of the new king, both Colman and Brendan were said to have discovered the lost burial place of Ailbe of Emly. Brendan demanded that Colman, having touched the sacred stone, should continue in his prominent position. Colman was so impressed by how Brendan conducted the service that he asked to be instructed in the rudiments of Christian faith.

Baptism and formation
After initial instruction, Brendan baptised Colman and sent him to St Jarlath of Tuam for further formation and was ordained a priest.

Colman’s principal foundation (560) was at Cloyne, Cluain Uamha, “Meadow of the Caves”, in east Cork, which Cairpre Crom, king of Munster, gave him as a site for a monastery and monastic school. The Danes plundered Cloyne in 822, 824 and 885. The diocese of Cloyne was named at the Synod of Kells in 1152. A cathedral and round tower in the village of Cloyne remains in the possession of the Church of Ireland. A Catholic cathedral of St Colman was built at Cobh, beginning in 1868 and completed in the early years of the 20th century.

Kilmaclenine
Another foundation associated with Colman was at Kilmaclenine, near Buttevant, in north Cork, which is said to have been his birth-place. His feast is observed on 24th November. 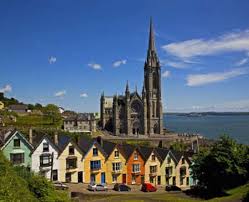