Summary: St Sarbel Makhluf, Priest, Born on 8 May 1828 at Beka’Kafra (Lebanon); died on Christmas Eve 1898 at Annaya. Maronite monk for 16 years, whose religious name is Sarbel or Charbel, received a good education and was ordained priest. Spent his last 23 years as a hermit. Noted for his ascetic poverty, solitary contemplation and devotion to the Eucharist. 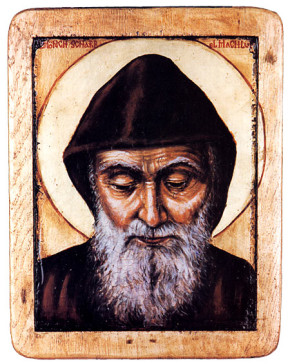 The Lebanese priest-monk Saint Charbel (or Sharbel) Maklouf  belonged to the community of the Monastery of St. Maron at Annaya for sixteen years and then lived as a hermit in the mountains for a further twenty-three. Many cures and miracles turned his tomb into a place of pilgrimage.

Family background
Joseph Zaroun Maklouf’s father was a mule-driver, he died when Joseph was three. His mother was a devout and admirable lady who regularly fasted. Some of his uncles had been hermits. At the age of twenty-three Joseph entered the Monastery of Our Lady of Lebanon (north of Byblos) for a two year-novitiate and took the name Sharbel,’Charbel’ may be a Frenchified version in honour of a second-century martyr of that name.

As his mother reflected on her separation from her son after he entered the monastery, she wrote to him, saying: “If you weren’t going to become a good religious, I would say to you: ‘Come back home’. But I know now that the Lord wants you in his service. And in my sorrow at being separated from you, I quite peacefully say to him: ‘May he bless you my son and make a saint of you’.”

Monastic formation
Sharbel was formed according to the Lebanese Maronite Rule of St Antony and professed his final vows in 1853. He was ordained six years later. After sixteen years as a monk with the community of Annaya (1875), he opted for a completely solitary life at the mountainous hermitage of Saints Peter and Paul dependent on Annaya. Here he spent the next twenty-three years in manual work, fasting, obedience and prayer and solitude .

Reputation for holiness
Sharbel was particluarly devoted to the Blessed Sacrament. When his superiors occasionally asked him to administer the sacraments to nearby villages, Charbel did so gladly. His reputation for holiness prompted people to seek him to receive a blessing and to be remembered in his prayers.

His death and burial
Sharbel died on Christmas Eve 1898. His brother companions of the hermitage spent the night kneeling nearby and praying. In the morning heavy snow blocked the paths. But the young men from Annaya and its neighbourhood, wearing their winter clothes and their heavy boots cleared the snow and his brother monks carried down Sharbel’s body on their shoulders to the monastery and to the grave.

His prayer
One of his prayers became well-known: “Father of truth, behold your son who makes atoning sacrifice to you. Accept the offering: he died for me that I might have life.”

Beatification and Canonisation
Pope Paul VI beatified Sharbel at the Second Vatican Council in 1965 and canonised him in 1977.