Summary: St Cecilia Virgin, Martyr. Though a late fourth century church in Rome was named after her, nothing is known of her life or death. Popular legends were written about her in the late 5th century, and in the 16th century she was named the patron of music. Honoured by the Church as a virgin, martyred for the faith, her name is included in Eucharistic Prayer I (The Roman Canon). 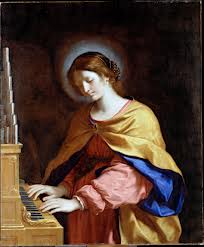 St Cecilia is one of the seven women saints, besides Mary, mentioned in the old Roman Canon (First Eucharistic Prayer) of the Mass, showing that these saints were venerated in 5th century Rome.

Patrick Duffy tries to unravel what the stories say about St Cecilia and how she became patron of music.

The Acts of St Cecilia describe her martyrdom
The 5th century Acta of St Cecilia tell of events in the early 3rd century. A Christian Roman maiden from a patrician family wanted to dedicate herself to God as a virgin, but her father had arranged her marriage to a young man named Valerian. After the marriage ceremony, she told Valerian about Jesus, adding that her virginity was protected by an angel. She said he could choose between serving the angel if he respected it and or being punished by the angel if he tried to consummate the marriage.

Perplexed, Valerian went off to find Pope Urban I (222-230), who was living among the poor along the Appian Way, and asked to be baptised. On his return, he found the angel standing beside his wife, and they both received a crown of flowers. Then his brother Tiburtius arrived, was told the story, and also went off to be baptised. The two then devoted themselves to good works and were arrested for burying bodies of martyred Christians. Refusing to recant, they were beheaded outside Rome, together with an official named Maximus, who was converted by their example. Cecilia then buried their bodies. 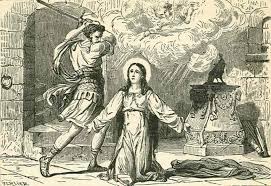 A crowd then gathered at her house, and Pope Urban baptised some 400 people there, one of whom established that house as a church – the detail which probably accounts for the origin of the story. Cecilia was condemned to be suffocated in her bathroom. The attempt failed. Then she was beheaded, but this was bungled, so she lingered for three days. She was buried in the catacomb of San Callisto.

A few more twists to the tale: A church of St Cecilia in Trastevere
Valerian, Tiburtius, and Maximus were actual martyrs, historically identifiable and buried in the catacomb of Praetextatus. Mention is made of an ancient Church of St. Cecilia in Trastevere in the fifth century, where Pope Symmachus held a council in the year 500. In 821 Pope Paschal I wished to restore this church which had fallen into decay, and had their remains moved there to be together with her supposed body, which he had been told in a dream was there and not in San Callisto. He had this enclosed in a cypress coffin in a marble tomb.  Pope Paschal founded a monastery in honour of these saints, near the Church of St. Cecilia, that the monks might perform the office day and night.

Restoration of 1595
Another restoration under Cardinal Sfondrati in 1595 led to their tombs being opened. Cecilia’s body was found to be incorrupt, and remained so for some days, long enough for a graphic altar sculpture of St. Cecilia to be made by the late-Renaissance sculptor Stefano Maderno (1600), before contact with the air caused the body to disintegrate. It was seen by many people, and full descriptions were written of it by the reputable historian Cardinal Baronius. The statue depicts evidence of decapitation, thus helping to confirm the identity of the saint. Incorrupt bodies are not a feature of earlier stories of saints, and no mention was made of it in 821; by the 16th century they had become quite “fashionable”, and this discovery was seen as a great coup for the Church of Santa Cecilia in Trastevere.

Patron saint of music and musicians?
Up to this stage there had been no association between Cecilia and music. Till then, those regarded as the patron saints of music were: Pope St Gregory I, credited with originating the style of liturgical singing known as Gregorian chant; from the Old Testament, King David, a fabled harpist and a composer of psalm tunes and texts and Job, who in Job 30:31 says: ”My harp is turned to mourning, my flute to the sound of weepers.” 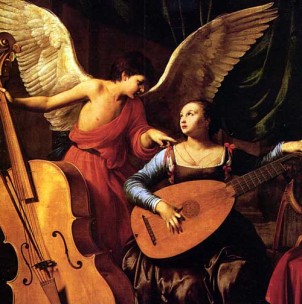 The Acta of St Cecilia telling how she converted her husband Valerian, her brother-in-law Tiburtius and the Roman official Maximus and her death set out the basis for her sainthood (canonisation). How she became the patroness of music and musicians can be traced to a misunderstanding of the account of Cecilia’s prayer during her wedding as reported in the Acta. What the Acta say is: “So at the ceremony, while musical instruments played around her, she prayed that she might remain as pure in body as she was in spirit”. Her prayers were answered when she converted Valerian to Christianity.

But by the 15th century the Vespers antiphon for her feast day highlighted the words: Cantantibus organis, Caecilia Domino leaving out the words in corde suo (in her heart) and the content of her prayer from the Acta account of the wedding. This led to an interpretation of Cecilia as actually herself singing and playing the organ. By Handel’s time, Cecilia, as well as being a virtuoso performer, had become a great appreciator of music!

Enormous popularity
Soon Cecilia is depicted in paintings as singing and playing the organ and is declared as the patron of music by musicians’ guilds. This led to an extraordinary growth in her popularity, especially when Palestrina helped set up the Accademia di Santa Cecilia  in Rome in 1584. She was even said to have invented the organ.

A total fabrication?
There are a many twists and turns to the story of Cecilia as patroness of music. There are many difficulties in writing off the story of Cecilia as a total fabrication, not least of them is the need for the ideals that myths express and that serve to guide and motivate us to high achievements. The Italians say: Se non è vero, è ben trovato. “If it’s not true, it’s still a good story”. 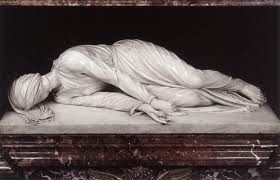 St Cecilia was first buried in the Catecombs of St Calistas.