Summary: St Catherine of Genoa‘s life was a very painful , she called her spiritual life is a ‘beautiful purgatory’. Her personality was both enigmatic and engaging. 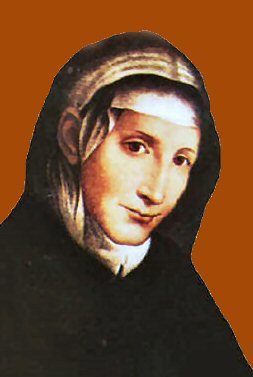 Catherine’s was a noble family, the Fieschi. As they had two popes in the family, they were Guelphs (supporters of the papacy). Her father died when she was young and despite wanting to be a nun at 13, her brother arranged a political marriage for her at 16 with a Ghibelline (supporters of the emperor), Giuliano Adorno, to end a feud between two families. It wasn’t a happy marriage: Catherine was intense by nature, Giuliano was hot-tempered, wayward and had several affairs. They had no children. One day in 1473 Catherine was so depressed she prayed God to keep her sick in bed for three months.

Turn around
Two days after her prayer, Catherine was filled with an overwhelming sense of God’s love and she had a vision of Christ’s passion.  This coincided with a reversal in Giuliano’s fortunes; his character changed and he became a Franciscan tertiary.

They both moved out of their palazzo into a small house. She devoted her life to looking after terminally-ill patients in the Pammatone hospital in Genoa where she became the director. Giuliano also joined in the work and both worked without pay.

The plague struck Genoa at this time and both were affected, but Catherine was able to nurse her husband – with real affection – until he died in 1496. She also cared for his longstanding mistress and her daughter.

Spirituality
Catherine had an intense spiritual life, going to daily Mass and receiving communion – which was quite uncommon at that time. She fasted completely throughout Lent and Advent, taking only water mixed with salt and vinegar to remind herself of the drink offered to Our Lord on the cross, and during these fasts she enjoyed exceptional health and vigour. 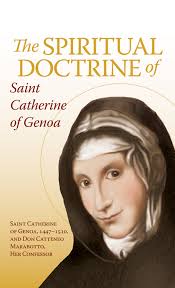 She had no formal spiritual direction and never went to confession until, after Giuliano’s death, she met a sympathetic priest, Don Cattaneo Marabotto, who succeeded her as head of the hospital. To him she made a general confession and it was he who wrote her biography. Together with a young lawyer Ettore Vernazza, they were part of a group of disciples with whom she shared her insights.

Her writings
During the ten years before her death, Catherine wrote a Treatise on Purgatory, which she describes as a place of joy rather than a place of physical suffering; it also seems to be a metaphor for how she experienced her own spiritual life. Similarly her Dialogue of the Soul and Body is a witty conversation embodying the internal conflict she had undergone between her spiritual goals and her bodily desires.

Death and legacy
Catherine died of natural causes on 14th  September 1510 at Genoa, Italy and was canonised in 1737. Many spiritual writers – Baron Von Hügel, Kathleen Jones and Benedict J. Groeschel – have written about her enigmatic but engaging personality.