Summary : St Catherine of Alexandria, Virgin, Martyr. She died in Alexandria (Egypt) perhaps in the early 4th century. Nothing is known about her. The famous tenth-century legend depicts her as a well-educated noblewoman, confronting the Emperor, confounding the philosophers in debate, and collapsing the wheel upon which she was to be executed. Honoured as a heroine of the Middle Ages. 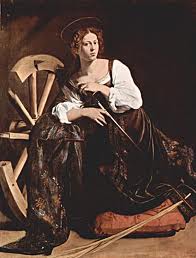 Although the cult of St Catherine at Mount Sinai only began in the 9th century and is unknown in the West before the 11th century, she is said to have lived in 4th century Alexandria. The image shown here is of a painting by Caravaggio 1598.

Legend
The legend is that Catherine was a noble, learned and beautiful maiden of Alexandria, the daughter of Costus, governor of Alexandria. She announced to her parents that she would only marry someone who surpassed her in everything, and if
“his beauty was more radiant than the shining of the sun,
his wisdom governed all creation, and
his riches spread throughout all the world”.

Witness to her faith
It is said that she visited her contemporary, the Roman Emperor Maxentius, and tried to persuade him to stop persecuting Christians. She succeeded in converting his wife, the Empress. The Emperor sent fifty pagan wise men to dispute with her, but she overcame all their arguments and all were subsequently burnt alive for their failure to convince her. She refused to deny her faith and marry the emperor. He had her beaten for two hours and imprisoned.

A martyr
The Emperor then had her tortured on a spiked wheel, but it fell to pieces and she remained unhurt, although some spectators were killed by flying splinters. Her constancy brought about the conversion of 200 soldiers, who were immediately beheaded. Finally Catherine too was beheaded, as she called down blessing on all who should remember her. 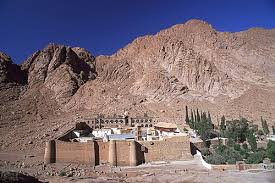 Saint Catherine’s Monastery on Mount Sinai
Legend says her body was carried by angels to Mount Sinai, where in the 6th century the Eastern Emperor Justinian established Saint Catherine’s Monastery between 548 and 565. It encloses the Chapel of Moses’ Burning Bush ordered to be built by Helena, the mother of Constantine I. The site is sacred to Judaism, Christianity and Islam. The monastery is a repository of early Christian art, architecture and illuminated manuscripts and is still open to visiting scholars today.
Another name for the monastery is The Sacred and Imperial Monastery of the God-Trodden Mount of Sinai. (The patronal feast of the monastery is the Transfiguration. The monastery is Greek Orthodox and is a UNESCO World Heritage Site.)

Her influence
Her principal symbol is the spiked wheel, which has become known as the Catherine wheel, and her feast day is celebrated on 25th November by most Christian churches. However, the Russian Orthodox Church celebrates it on 24 November, because Empress Catherine the Great did not wish to share her patronal feast with the Leave-taking of the feast of the Presentation of the Theotokos. Because she was Catherine the Great’s patron, the Catholic Church of St. Catherine, one of the first Catholic churches built in Russia, was named after Catherine of Alexandria.

This beautiful and ancient Basilica of San Clemente on Via Labicana, in Rome, (not far from the coloseum)  is certainly the most amazing and awe inspiring tri-basilica church in the eternal city. It’s three basilicas, mosaics and crypt are certainly a must see for religious tourists.  What is especially intriguing about this beautiful medieval basilica is an often underrated artistic gem; the Branda da Castiglione chapel, in the left hand aisle (ground level basilica) dedicated to St Catherine. The eight scenes of the fresco cycle represent the life of  Catherine of Alexandria on the left-hand wall and that of St Ambrose on the opposite wall.