Summary: St Catherine Labouré is  the religious sister associated with the miraculous medal devotion. For forty-five years from the time of her visions in 1831 until her death in 1876 she led an outwardly uneventful life as a Daughter of Charity in Paris.

Zoë Labouré was born at Fain-les-Moutiers near Dijon in the Cote d’Or, the eighth of ten children of farmer Peter Labouré and his wife Magdalene Gontard. For several years she looked after her widowed father, then as a waitress in her uncle’s café in Paris. 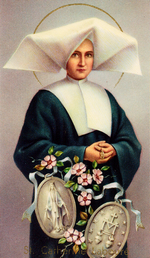 Zoë joined the Daughters of Charity at the Rue de Bac convent in Paris, taking the name Catherine. Here she did her novitiate and was professed. During her novitiate she had visions in the convent chapel, but hardly anyone knew about these until a few months before her death.

Subsequently she lived at Reuilly (Paris) for 46 years. She acted as portress, looked after the elderly in a rest-home and tended the poultry.

Miraculous medal
Catherine was described as matter of fact and unemotional by temperament. But some months before her death, she reported that during her novitiate the Virgin Mary appeared to her standing on a globe with shafts of light coming from her hands;

she was surrounded by the inscription “Mary conceived without sin, pray for us who have recourse to thee” and an inward voice told her to have a medal struck embodying Mary of the Immaculate Conception on one side and on the other a capital M with the cross over the hearts of Jesus and Mary surrounded by twelve stars (Apoc 12:1). She said she was told to have this produced as a medal: 1500 were minted in 1832, authorised by the archbishop of Paris. In 1836 a canonical enquiry accepted the visions as authentic.

A jew converts and becomes a priest
This judgment seemed to be confirmed when an Alsatian Jew, Alphonse Ratisbonne, was converted to Christianity in 1842, became a priest, and founded the Fathers and Sisters of Sion. After this the Miraculous Medal devotion was widely propagated.

Death and canonisation
Catherine died in 1876. Her body remains 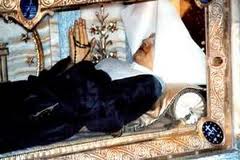 in the convent chapel in the Rue de Bac, Paris. Miracles were reported at her tomb. She was beatified in 1933 and canonised in 1947.

The image (right) shows her incorrupt body at the Rue de Bac convent in Paris.