St Cathaldus is invoked against plagues, drought and storms.

Summary: St Cathal of Taranto. This could be a case of ‘manufacturing’ of a saint. The saint’s cult is centred in the city of Taranto, just under the heel of Italy, where the cathedral is named San Cataldo after him. (See image). He is honoured in other places in South Italy, Sicily and Malta. Recently there has been a link between him and the village of Shanrahan in Clogheen parish in south Tipperary. St Cathaldus is invoked against plagues, drought and storms.

Patrick Duffy researches the pieces of his story.

Tradition that he was bishop at Taranto 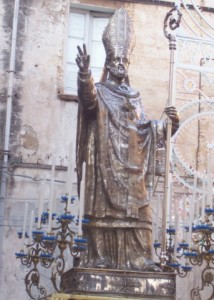 The tradition at Taranto is that Cathal came from the monastery school at Lismore, Co Waterford, Ireland, and arrived in this city en route to or from the Holy Land and was chosen as its bishop. His cult certainly goes back to 1071 when his relics were found in a coffin at Taranto with a pastoral staff of Irish workmanship with the inscription Cathaldus Rachau. He is the titular of the cathedral there and the principal patron saint of the diocese 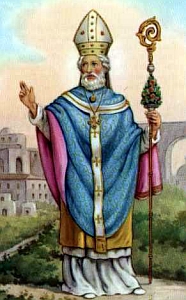 Spread to Sicily and beyond
The Benedictines of the Norman kingdom of Sicily and south Itlay inspired devotion to him. He appears in mosaics in Palermo and in the basilica of Monreale. There is even a painting of him on one of the pillars in the Church of the Nativity at Bethlehem commissioned by the Norman archbishop Drogo of Taranto and approved by the Norman patriarch Raoul of Jerusalem. The earliest account of his life was written by an Italian monk Petrus de Natalibus in 1382.

Where in Ireland?
Efforts to identify a diocese of Rachau have suggested Shanrahan or Rachaa in Co Tipperary (See the website, where the links between Shanrahan and Cathaldus are explored). Another suggestion is Rahan in Co Offaly with the hypothesis that he was a missionary from an Irish monastic centre on the continent. The first interest taken in this saint in Ireland was in 1746, when he was linked with a claim that the diocese of Cashel should take precedence over the diocese of Armagh!

Stained glass window in Clogheen, Co Tipperary
In 1963, Fr. Frank Mackin, a Jesuit priest from Boston, came to Clogheen to research his family history. Following that visit, he went to Taranto to research the life of Saint Cathaldus. He was amazed that there was neither a statue nor a stained glass window commemorating the Irish Saint in the Clogheen Church even though it was obvious from the writings of the historian Fr. Everard – Clogheen’s Parish priest in the early years of the twentieth century – and from local tradition, that Clogheen people were aware of the historic link between Taranto and Shanrahan. He resolved to do something about it. In 1986 the Mackin family of America, Ireland and Australia installed a beautiful stained glass window in St. Mary’s Catholic Church, on Clogheen’s Main Street. The window, on the west wall of the church, depicts the life of St. Cathaldus in Shanrahan, his journey to the Holy Land and his being shipwrecked off the coast of Southern Italy. Is that it?