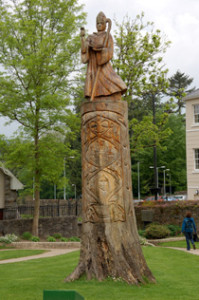 Summary: St Carthage was a Kerryman who set up a monastery, first in Kerry, then at Rahan in Co Offaly, and finally at Lismore in Co Waterford. In later centuries Lismore became the seat of a diocese. In 1363 the diocese was joined with Waterford. Carthage is still its patron saint.

Early life in Kerry
Carthage was born in Kerry. One day as he was herding pigs in the fields, he saw a bishop and his clergy in procession, chanting psalms, and ran to tell his father he had never seen anything so beautiful. His father wanted him to become a warrior, but he eventually agreed to allow him become a monk in a neighbouring monastery under the guidance of St. Carthage the Elder. Carthage the Elder called him ‘Mo-chuta’ as an affectionate dimunitive and subsequently ordained him a priest.

Pursued by the young women
Mochuta founded a small monastery in Kerry. Since he was very handsome, ‘maidens to the number of thirty were so enamoured of him that they could not conceal their feelings’. He built cells and a monastery especially for them, and persuaded them to devote themselves to God as virgins.

Visits to other monasteries
After some time he visited and stayed with other abbots and monasteries, Comhgall at Bangor and Colman Elo at Lynally in Offaly, on whose recommendation in 590 he founded his monastery at Rahan about two miles away.

Rahan
The monastery at Rahan had many monks and thrived for over 40 years. But the regime was so severe that Carthage would not provide his monks with oxen and a plough, forcing the monks to till the soil manually. There are stories of efforts by his monks to get rid of him, saying they felt unable to be his equal in virtue and austerity. Eventually the whole community was expelled by orders of Blathmac, the High King of Tara. The real reason may have been that the neighbouring communities envied him his success or possibly because he observed the Roman Easter date, whereas local monasteries followed the older Celtic reckoning.

Lismore
At Eastertide of the year 635, the saint and his whole community were forced out by soldiers. Journeying by Saighir, Roscrea, Cashel, and Ardfinnan (the narrative implies the approval of the patrons of these places), St Carthage finally came to the banks of the River Blackwater, where he obtained a place for his foundation from the king of the Déisí at Lismore in Co Waterford. Although he died within a short time on 14 May 637, Lismore became a famous abbey and later a cathedral, giving its name to the diocese that since 1363 has been joined with Waterford.

Influence
Carthage’s chief legacy was that of an austere and blameless life. But by the end of the 7th century, Lismore Mochuda, besides having a thriving abbey, also had a scriptorium that produced three 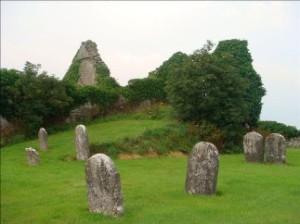 important manuscripts of works on scripture, asceticism and morals. A Life of St Mochuda survives, as does a considerable fragment of a Rule of St Carthage (more a series of Christian ascetical counsels than regulations for running a monastery).

Besides at Lismore, Carthage is also remembered in the dedication of St Carthage’s Church, Killina, Rahan in Co Offaly.